Treneé McGee was at a crossroads. Down one path, she was ready to organize a rally for Mubarak Soulemane, a young Black man killed by Connecticut police in January. Down another, a group of people expected her to scale her actions back. She took a deep breath and let her mind clear.

McGee, who has made history as West Haven’s youngest City Council member last year, was one of the panelists at the second Strength Within Me brunch, held Sunday at Long Wharf Theatre in honor of International Women’s Day. Three months after the inaugural brunch, panelists focused on the importance of intergenerational wisdom and “going high” (a la First Lady Michelle Obama), even when the odds seemed stacked against them. Almost 80 attended.

From the outset, the room seemed primed for International Women’s Day. Outfits in red, burgundy and bright patterns mixed with tablecloths in black with purple napkins. Thick, savory aromas wafted over the room, courtesy of Olmo Kitchen, Stacks New Haven, and The Greek Olive. Music from a local band played attendees in. T-shirts advertising “Girl Power” were folded neatly on tables across the room.

After mixing and mingling, attendees took their seats for the discussion. Monique Harriott, who has been writing poetry since 2009, opened the panel with her poems “Girl to Woman” and “Self-Love.” She explained that the first, written in 2018, was a reflection on what she would have told her nine-year-old self if given the chance. The second, which she wrote in late 2017, came out of the realization that “self-love comes first.”

“I wish I could have told you then how magnificent you are now,” she read from the first. “I would’ve told you that beauty isn’t all about the skin type, the hair type… I told you everything happens for a reason.”

Harriott’s work acted as a launchpad into a discussion that covered generational equity and coalition-building, personal struggles, self-reliance and an approach to taking the high road in the face of adversity. Norfleet dug right in, asking panelists what generational equity meant to each of them. 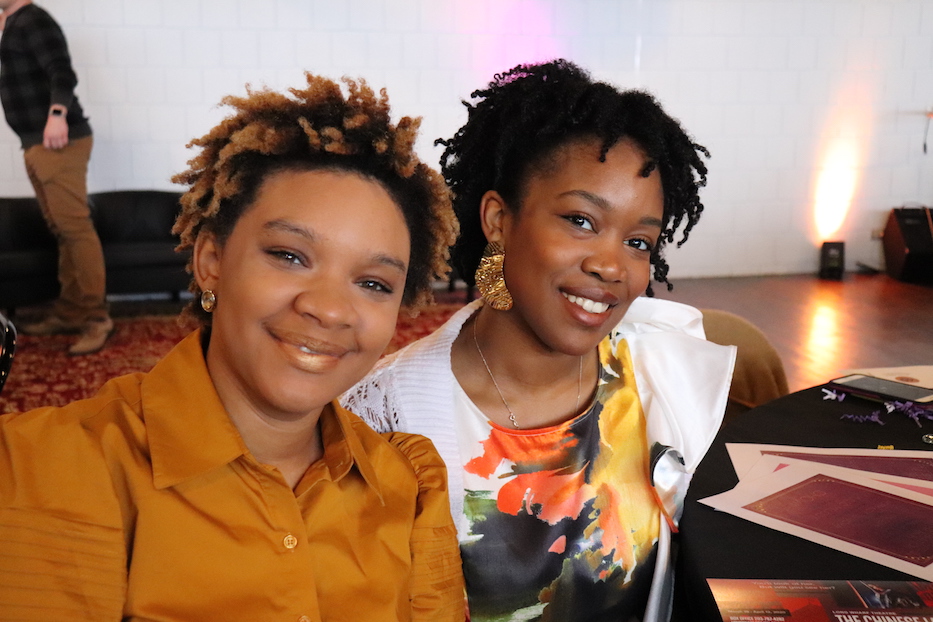 McGee (pictured above) reflected on her own backstory, which didn’t include going into politics until suddenly it did. She recalled attending school —she is a graduate of Cooperative Arts & Humanities High School and Marymount College Manhattan—for the dramatic arts.

While she was there, she became president of the school’s Black and Latino Student Association. She organized a protest after Eric Garner’s murder and the non-indictment of a New York City Police officer in 2015.

She was never trying to be political, she said. She just trusted that it was part of a bigger plan. As she spoke, she urged attendees not to shrink into themselves, and not to forget who they are and what they stand for.

“I wrestled with even running,” she said. “But then I realized that I wanted to create a foundation and legal legacy that makes it easier for those to come just like it was for me. It’s so funny to be in a position where you’re honored or you’re recognized, because I can’t take credit for the fight of those who I stand on the shoulders of. ”

Norfleet also nodded to First Lady Michelle Obama, whose remarks that “when they go low, we go high” at the 2016 Democratic National Convention have had staying power.

Gardin, who has worked on the city’s arts scene for decades, pulled from her own history. While attending Catholic school in the 1960s, she wasn’t allowed to sit in front of the room because white students couldn’t see “over the cloud of her hair.” For Gardin, who has worn glasses since she was six years old, it meant that she could no longer see the board.

Her mother told her to obey the rules. Then she told her grandmothers, both of whom had experienced legalized segregation.

“One of them told me: ‘Baby, just remember that they don’t know you and that you're there to get an education,’” she recalled. “ … My other grandmother said, ‘it’s nothing personal, just keep going and exceed anyway.’”

Gardin did. Decades later, she has become a literary rockstar and community arts organizer that younger women can look up to. In addition to leading a monthly book club at People Get Ready Books, she is organizing the inaugural Elm City LIT Festival for April of this year. Scheduled for April 25 at the Connecticut Center for Arts & Technology, the festival is intended to bring together and celebrate authors and readers of color across New Haven and the wider region.

Brown, who has risen the ranks at the New Haven Free Public Library to become the Branch Manager at Dixwell’s Stetson Branch Library, later added that she does not see every battle as hers to fight.

“People expect for us to go high all the time,” she said. “And every battle is not my fight, but I can give advice to those that choose to fight those battles.”

Coming to the end of the discussion, Norfleet asked the panelist members if they had any words of encouragement for younger girls.

“Be a fighter,” said Ortiz. “And don’t stop fighting.”

For more information on upcoming events happening at the Long Wharf Theatre, check out their website.