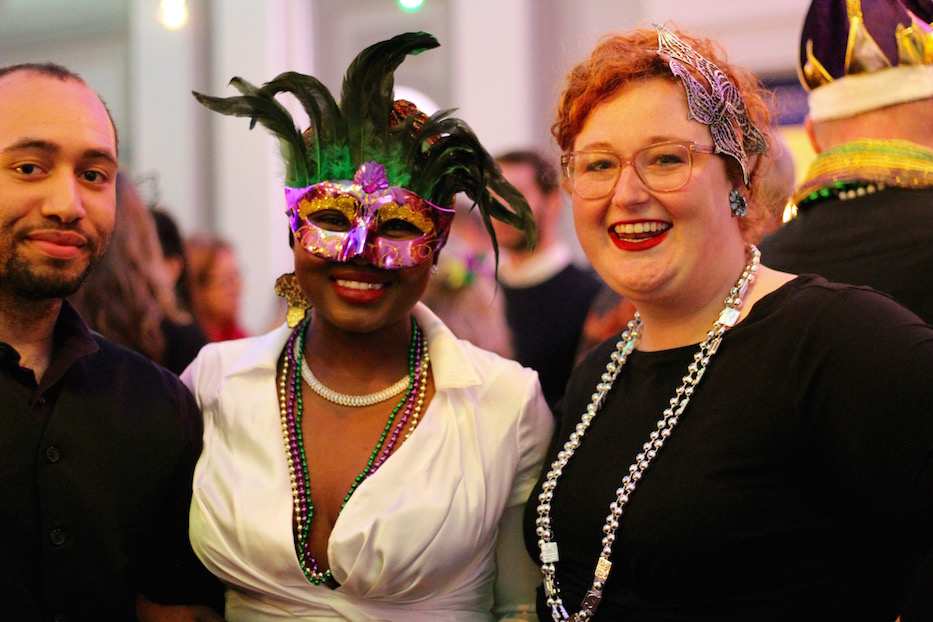 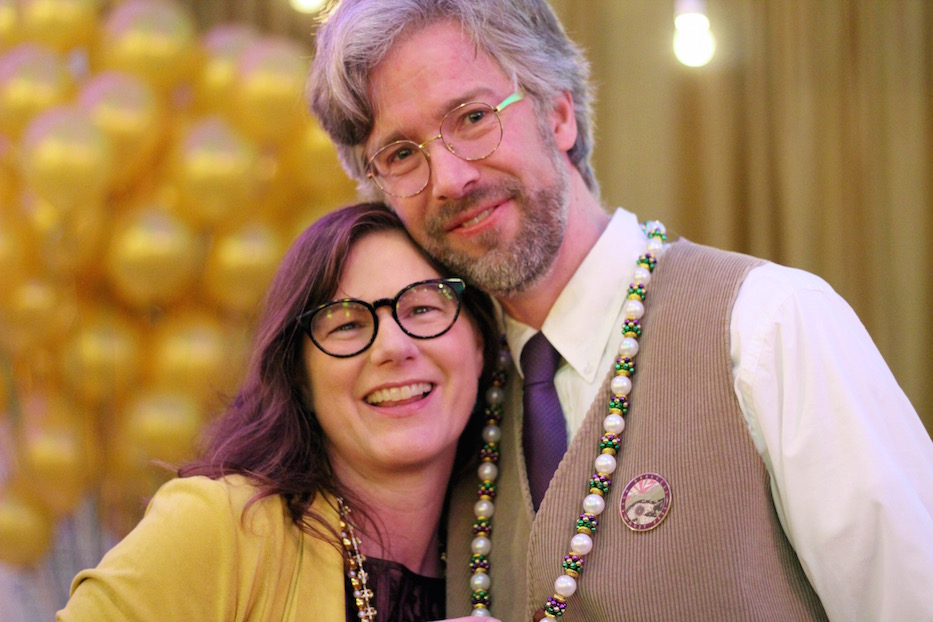 Gina and Greg Mackinnon were married on Mardi Gras weekend in New Orleans. When they saw that the New Haven Free Public Library was having a big party on their 20th wedding anniversary, it felt like fate.

Tuesday, the Mackinnons joined over 250 bead-sporting bibliophiles at the New Haven Free Public Library for its 18th annual Mardi Gras celebration and fundraiser. After two years in Westville, the Fat Tuesday fête moved back downtown to celebrate local storytelling, dance the night away, and raise funds for programming across all five branches.

The event raised $65,000 by the end of the night, including an on-the-spot fundraising pitch in which drag queen Kiki Lucia raised $10,000 in under five minutes. It doubled as a soft launch for a rebranded New Haven Story Project, a storytelling collaboration among the library, Baobab Tree Studios, the New Haven Museum, and Elm City Innovation Collaborative. 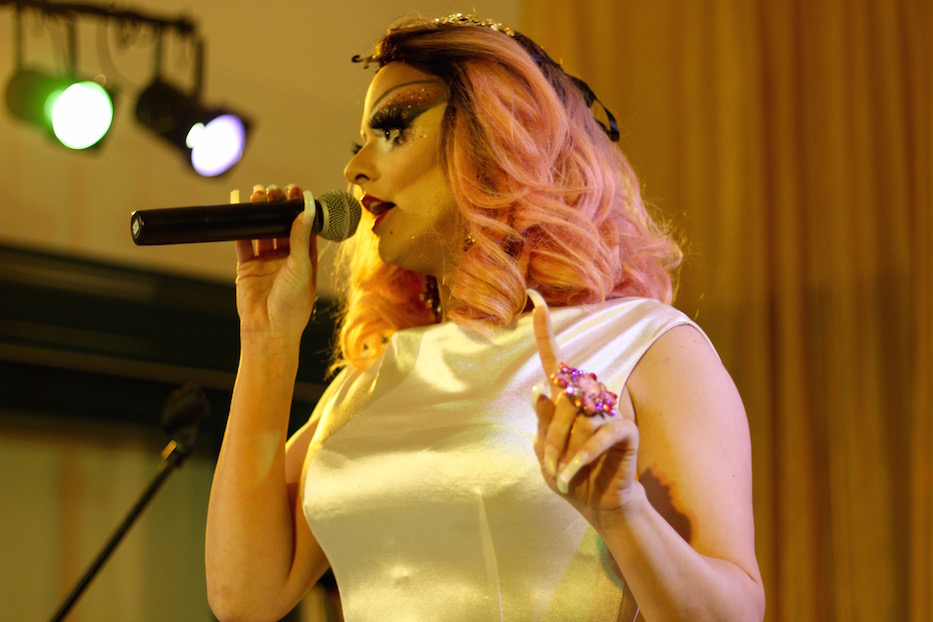 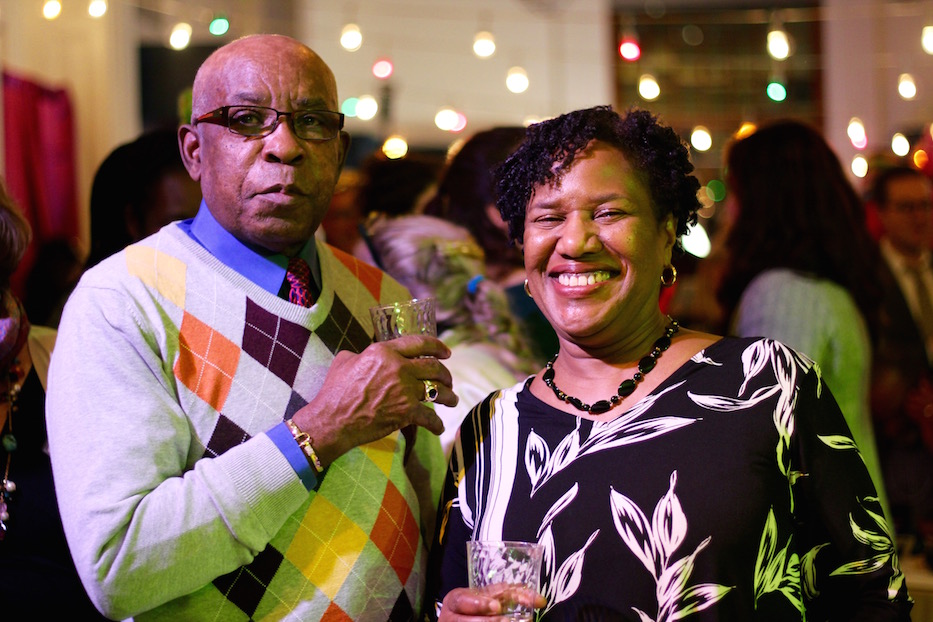 “I want to thank all of you for being here tonight ... to make sure that this library, and all of our libraries around this city, stay open to the community,” Lucia said. “And [that they] continue to be an equalizer for knowledge and access to information.”

As Lucia wove through the room, her words dovetailed with this year’s theme “New Haven: A City of Stories.” On one wall, an interactive touchscreen beckoned with big, luminous text and images. At a makeshift stage, the musician Thabisa and her band prepared to spin stories from South Africa to Mississippi to New Haven. 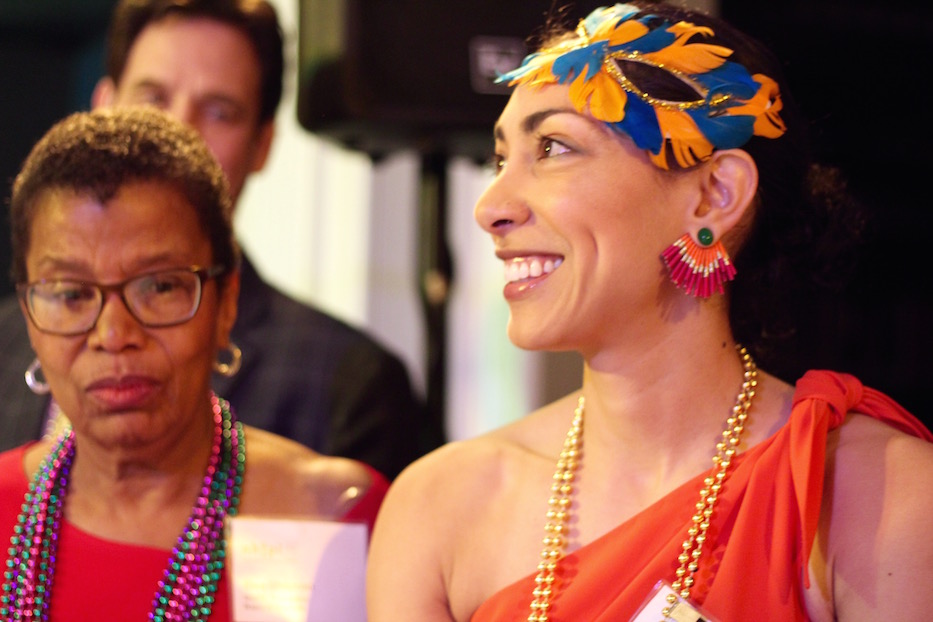 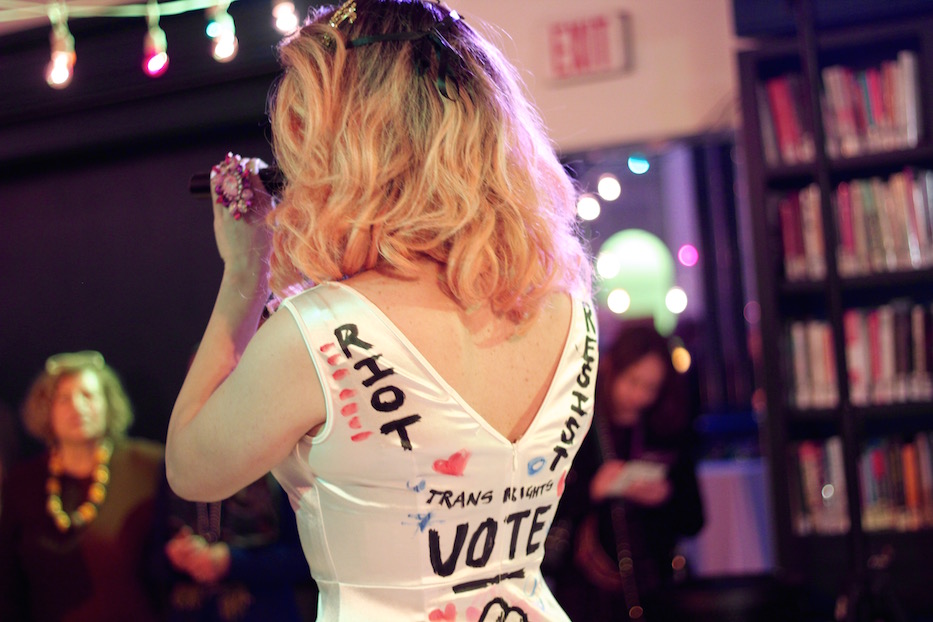 As she raised a surprise $10,000 for the library, Lucia wore her own story as a queer artist on her sleeve and over her corset. Early this year, she commissioned a piece of wearable art from the artist Ricky Mestre. From the front, attendees saw only a simple silk dress with a low V. When Lucia turned and walked through the space, she revealed a back that was painted with the words “vote,” “riot/resist,” and “queer liberation,” with the images of a raised fist and couple kissing.

Around her, attendees wore their stories in glittery top hats, dresses, poppy-orange jumpsuits and lots of bright, feathery masks. As she glided around with a cocktail, New Havener Shaina Hotchkiss turned into a walking version of the children's book Chicka Chicka Boom Boom, which she reads to her three-year-old daughter.

At the reference desk, a mix of librarians-turned-bartenders and real life bartenders from High George at the Blake Hotel kept the good times rolling with honey-colored cocktails, red and white wine, local beer and fizzy water. 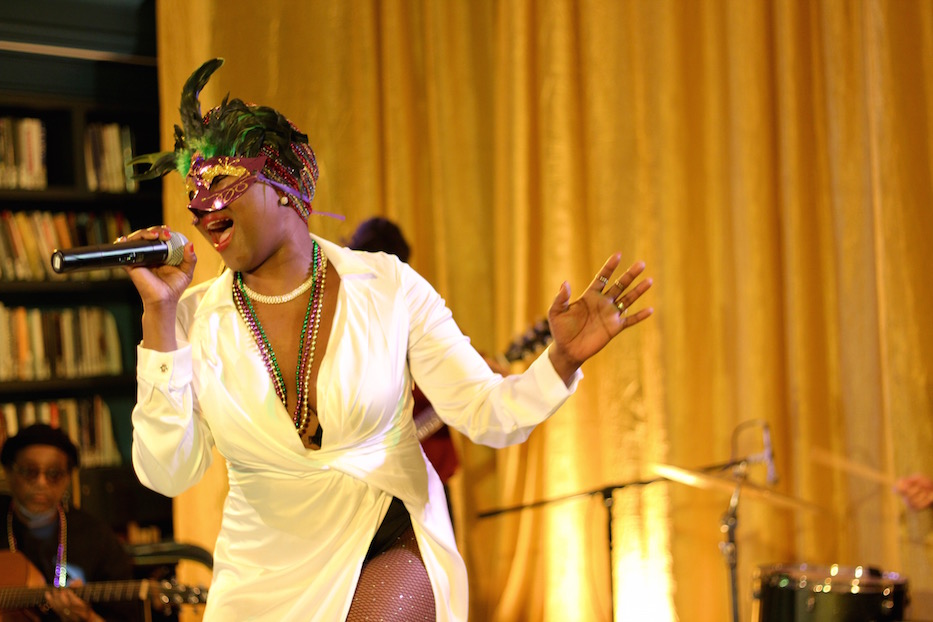 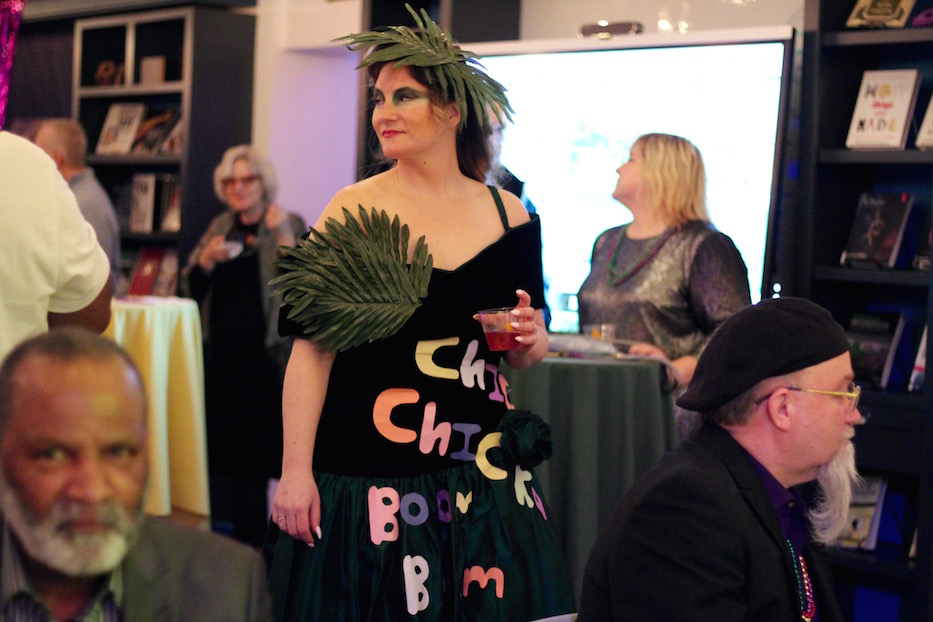 Around them, stories filled the library. There were the Mackinnons, New Orleans transplants who now live in the city's Westville neighborhood. Twenty years ago, the couple got married on Feb. 25—which happened to be the Friday before Mardi Gras weekend festivities—in New Orleans. Now, they are self-professed fans of Mitchell Branch Manager Sharon Lovett-Graff.

Tuesday, they came with outfits that celebrated their time in New Orleans, with shiny, bright Mardi Gras beads and an homage to the Krewe of Muses, an all-female parade krewe born in 2000. Dressed in a sun-yellow blazer with matching gold beads, Gina sported a sheet of music from the Muses on her back.

There were stories from Carmen Rodriguez, a retired social worker who has lived in New Haven for 40 of her 79 years, and spent the better part of the night tearing up the dance floor with Thabisa. After moving to the city from Puerto Rico, Rodriguez raised her children in West River, in the same house on Ella Grasso Boulevard where she lives now. When her son and daughter were young, she took them to the Mitchell Branch library as a place to find books. 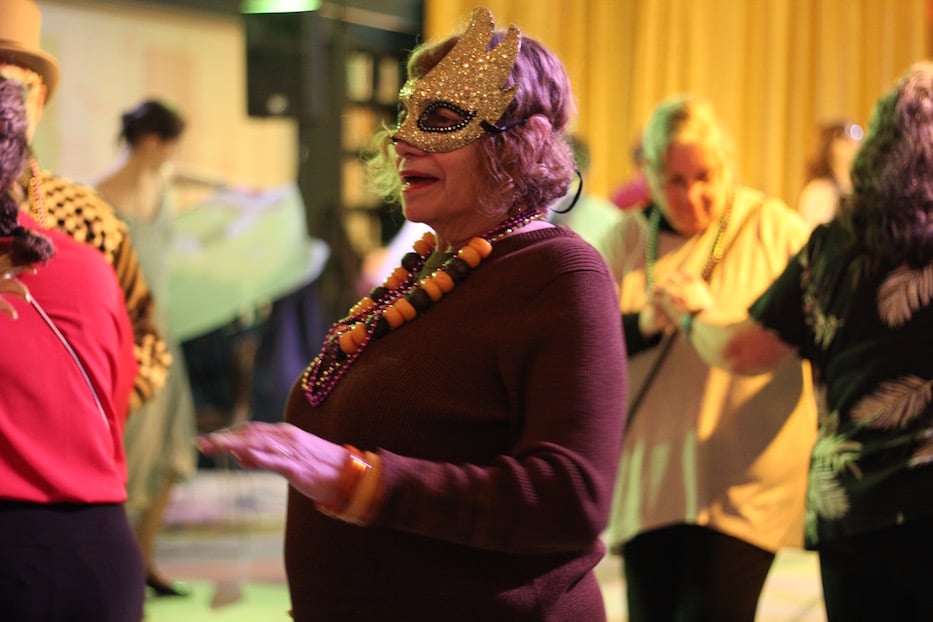 But "there was a disconnect"—she didn't pay attention to what the library also offered for adults, because her job for the City of New Haven left her exhausted. When that ended, she had another for the City of Bridgeport for almost two decades.

When Rodriguez retired four years ago, a friend suggested that she check out the book from the library's Mitchell Branch. Rodriguez met Lovett-Graff, of whom she has since become incredibly fond. She picked up a calendar, and started attending free classes, lectures, movies and art exhibitions.

Last year, she planned a 45-day trip to South America entirely with the library's resources. She praised the library for its partnerships with Long Wharf Theatre, the Yale Repertory Theatre, and Gateway Community College. Now that her children are grown and she is retired, the library has become a routine part of her week in New Haven.

"Going to Florida? Not on my list," she said. "New Haven is the place to be." 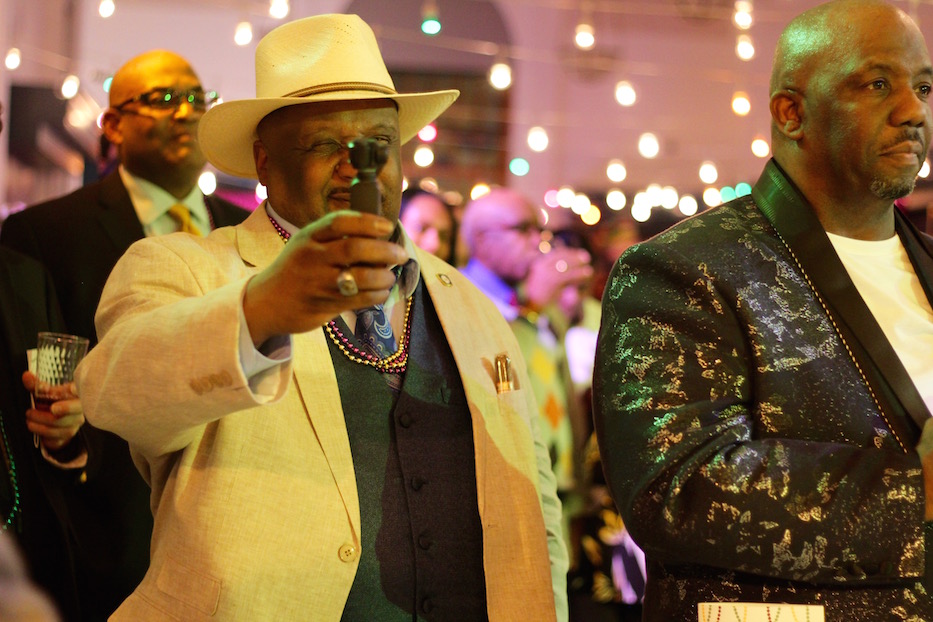 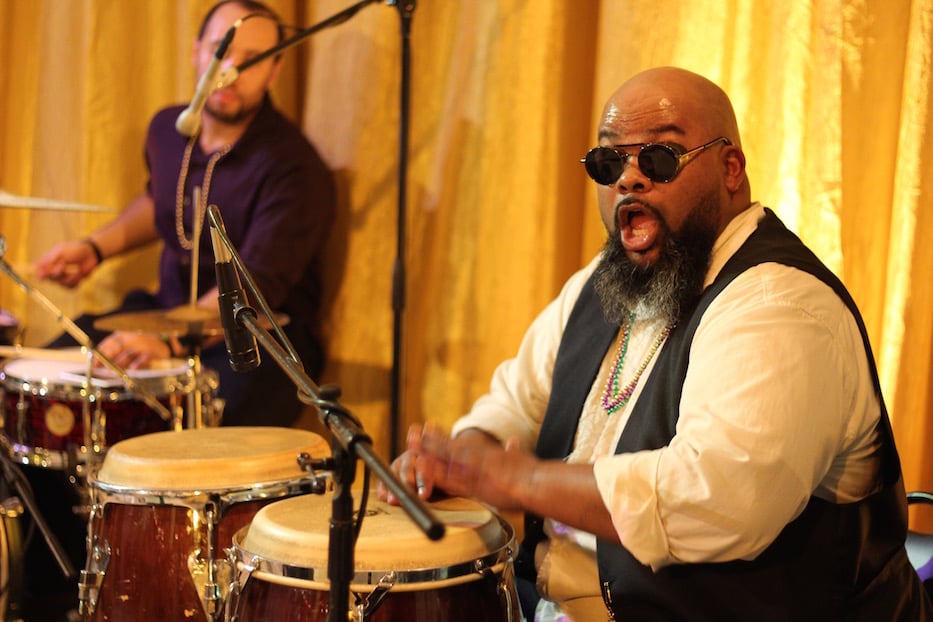 That kind of anecdote is one the library is hoping to hear more of as it embarks on the New Haven Story Project with the New Haven Museum, Baobab Tree Studios, and the Elm City Innovation Collaborative this year. Two years ago, a story collection element was included in the same $150,000 innovation grant from CT Next that funded Ives Squared. The library connected with Pass It Down, an interactive platform that uses touchscreen technology to tell stories with text, image, video and audio.

When the organization was looking for collaborators, the still-fledgling New Haven Story Project seemed like exactly the right fit. For five years, the project has been working to collect stories at neighborhood festivals, senior centers, and with local partners including A Broken Umbrella Theatre. But there was always a bandwidth issue, said Baobab Founder Rev. Kevin Ewing. So when former City Librarian Martha Brogan reached out to him, he said yes. The project’s official launch is set for June, during the International Festival of Arts & Ideas.

“The idea was to get New Haven stories,” he said. “So I’m happy. I’m thrilled. It was always intended to be for the community. This is exactly what it’s supposed to be.”

It comes at an opportune time for the library. In January and February, a new mayoral administration announced the groundwork for a cultural equity plan that includes the library. Tuesday,  NHFPL Foundation President Elsie Chapman announced that fundraising for the next chapter of the Stetson branch, which is planned for the first floor of the new Q House on Dixwell Avenue, is almost complete. Of an initial $2 million goal, the foundation is only $52,000 away from full funding.

City Librarian John Jessen said that he’s excited for the New Haven Story Project to make its home at the library. He noted the sheer number of memories that are floating around the city, which disappear from public consciousness when they are not collected.

"Someone might say, 'I played at that jazz club in '69.' And all of a sudden, someone else says, 'I was a bouncer at that club in '69!' And you have these two people, who may not have known each other, who shared this experience in New Haven." 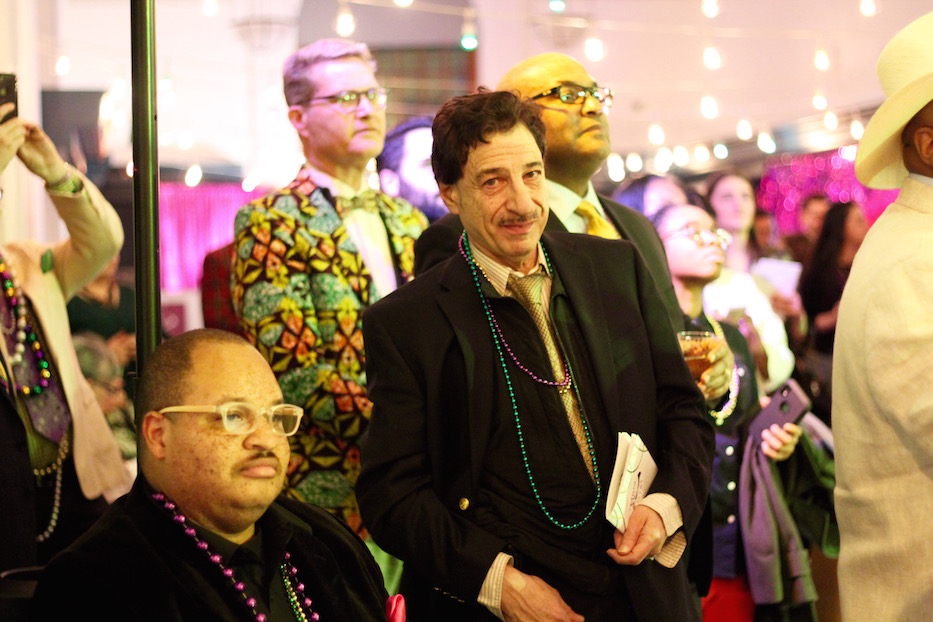 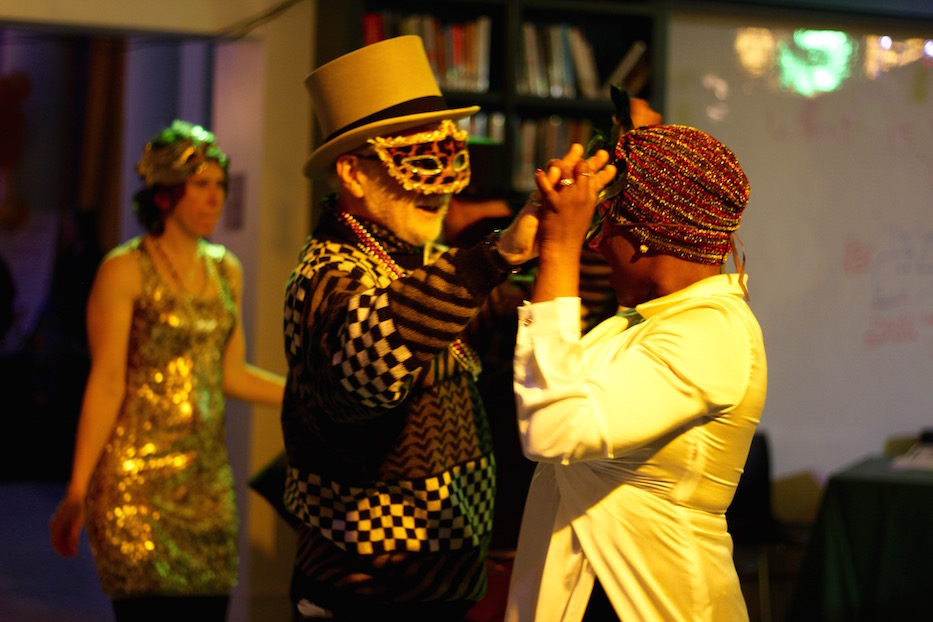 Before attendees danced the night away. Mayor Justin Elicker praised the library, and particularly Jessen, for telling some of those stories.

After crooning a few lines of Sam Cooke and telling at least one well-rehearsed, library-specific dad joke, he took a more serious tone, focusing on the library's role as a de facto job bank, community center, warming and cooling hub, sanctuary, and champion of the 2020 Census.

"You look at the challenges that we face around our nation today, and I think we have a real problem with public discourse and a lack of mutual respect and understanding from community members who have so much more in common than we actually realize," he said. "Our experiences in libraries, and in particular in New Haven public libraries, are a step in the direction where we can create a space where we can have that discourse.

"We can learn from each other,” he added. “We can understand each other better."

To find out more about the New Haven Free Public Library, visit the organization's website.