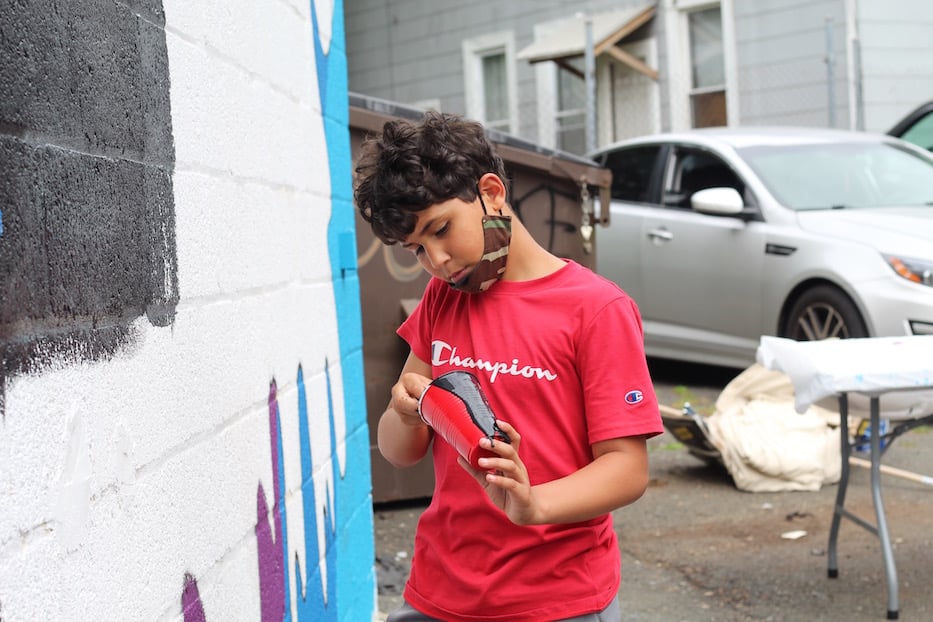 Emanuel Diaz dipped his paintbrush into a red solo cup and coated it with velvety black paint. It clung to the bristles like wet silk. Across the wall, a half-finished image of Coretta Scott King offered him a tight-lipped smile. He reached up and began to paint over a row of white bricks.

Saturday, 10-year-old Diaz was among 30 community members who came out to paint one of two murals at the Five Star Laundromat Center, tucked onto Washington Avenue in the city’s Hill neighborhood. The murals are an initiative among CT Murals, the Courtland Seymour Wilson Branch of the New Haven Free Public Library, and New Haven-based artists Isaac Bloodworth and Kyle Kearson. They are funded in part by a grant from Sustainable CT.

This coming Saturday, collaborators plan to unveil two new murals in time for Juneteenth. It is part of CT Murals’ MLK39 Racial Equity Mural Tour, which will run through this summer. 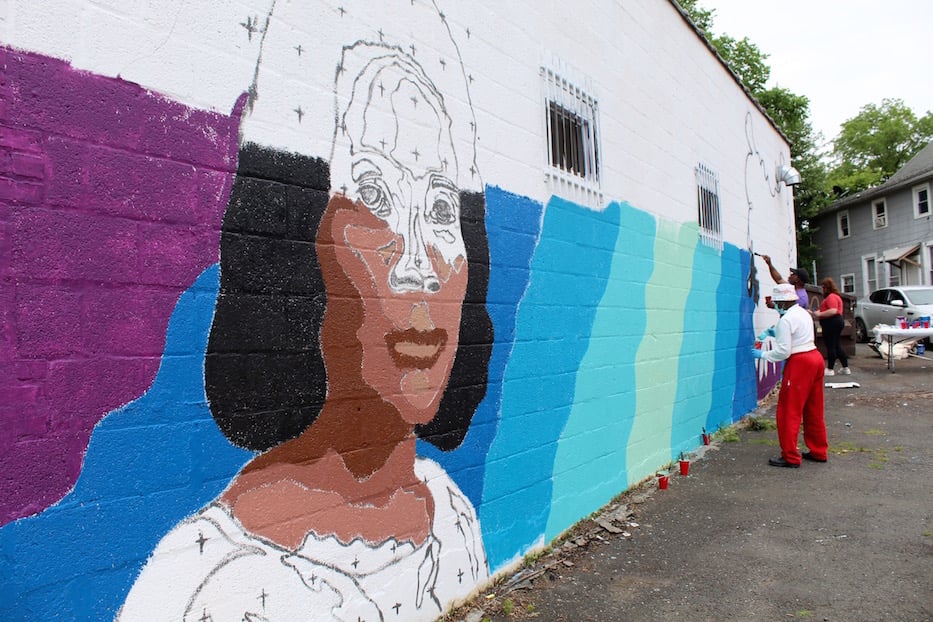 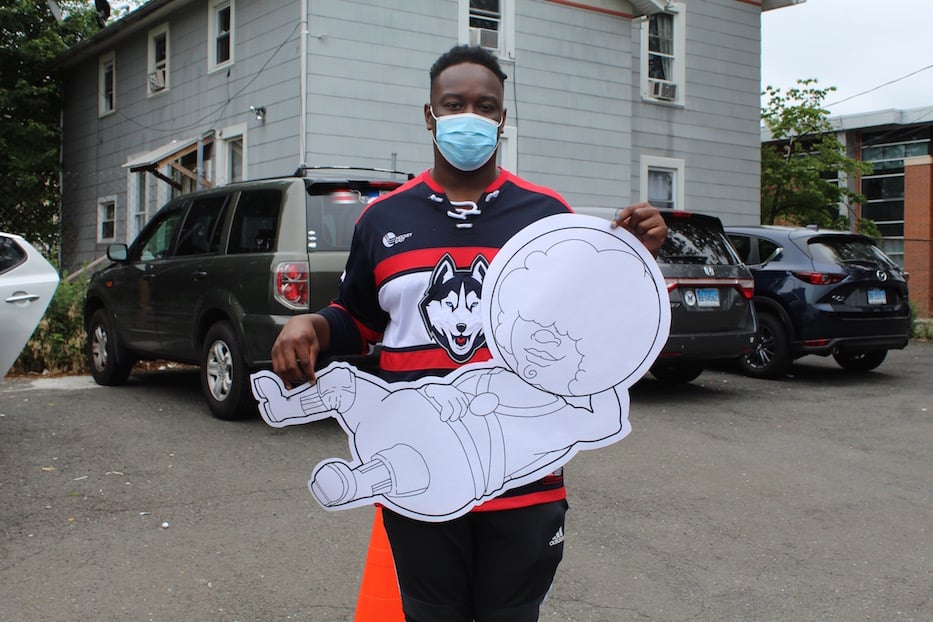 Top: One of the two murals. Bottom: Bloodworth with Joy as an astronaut.

Painted on opposite sides of the laundromat, the murals feel right on time—or long overdue—in a neighborhood that runs deep with Black history. On one side, Civil Rights icon Coretta Scott King looks to her right, wide eyes fixed on a thought bubble that is painted black. Inside, it waits for fresh words from the New Haven poet and activist Sun Queen that will bring the mural squarely from past to present. In between the two, bands of purple, blue, teal and green undulate across the distance.

On the other side of the laundromat, Bloodworth has returned with his character “Joy Da Black Boi,” who he said he thinks of as a younger version of himself. It will show Joy as an astronaut, floating happily in space, as well as Joy jumping from the pages of a book and running through childhood. Saturday, Bloodworth gleefully pulled a full-size rendering from his car, showing off the sweet boy in space who will soon be an honorary resident of the neighborhood. Joy smiled from inside a round space helmet. His curls fell gently over his eyes.

Bloodworth first heard about the project from Matt Conway, who runs CT Murals out of Hartford. Conway had seen Bloodworth’s vinyl installation of Joy surfing on a pink soda stream in a vinyl installation outside City Hall and was impressed. Bloodworth looped in Kearson, who is a colleague at the Yale Center for British Art and a sculptor and multimedia artist in New Haven. CT Murals also commissioned a poem from Queen, which she plans to read at the unveiling on Saturday. 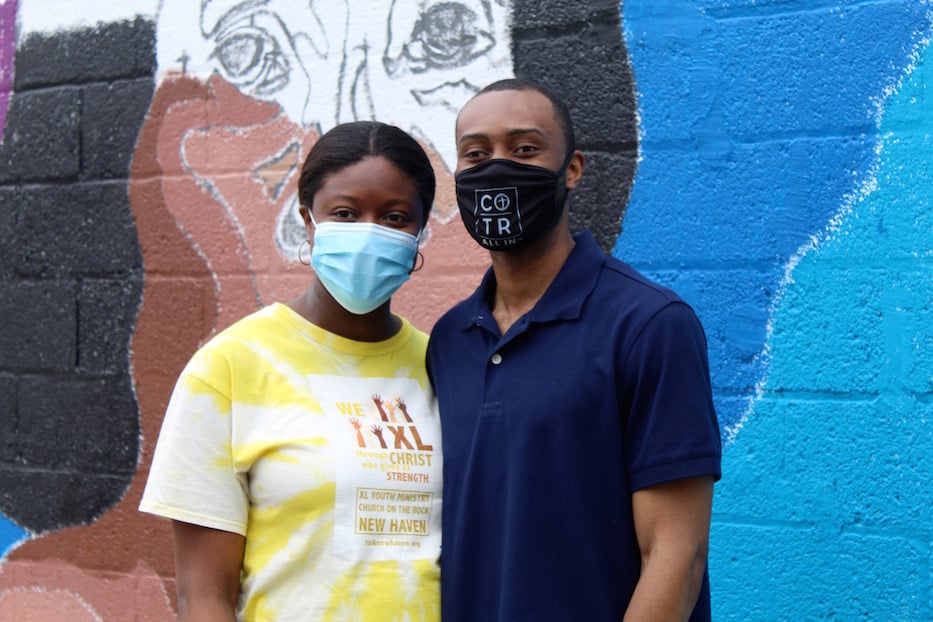 Aliyah Manning and Solomon Green. Green grew up in the neighborhood.

Bloodworth and his partner Joy Meikle, an artist who is also doing freelance work for CT Murals,  said the pieces work against the widespread erasure of Black people, and especially Black women and queer and nonbinary people, from the history of social movements.

They pointed to a trend that is both national—people are quick to remember Martin Luther King, Jr., but not his advisor Bayard Rustin, who was gay, or King’s wives and daughters—and local. The Hill, which is one of the city’s most diverse neighborhoods, is full of untold Black stories.

The laundromat, for instance, is across the street from the Wilson Branch, named after lifelong activist Courtland Wilson. Five decades ago, the Black Panthers’ headquarters appeared at 35 Sylvan Ave., just a ten minute walk from where the Five Star Laundromat now sits. Ann Boyd, who still lives in the Hill, worked with Ericka Huggins and others to support the Panthers during their time in the city. Fifty-one years later, there are still New Haveners who don’t know that Black Lives Matter New Haven is run by five queer Black women.

Last weekend, community members were eager to come out and paint. Using a “paint by numbers” format, they covered the wall in waves of brilliant color, the blocks of blue and green appearing one by one. Solomon Green, who grew up nearby on Adeline Street, came out with his wife Aliyah Manning after hearing about the project from Kearson.

A self-described occasional artist—"I try to paint when I can,” he laughed—Green said that he’s excited to see more public art in the neighborhood. As a lifelong New Havener and the youth director at Church on the Rock, he jumps at opportunities to get involved with the community.

“It brings a form of togetherness to the community,” added Manning as she put some final touches on King’s left cheek before heading out. It glowed brown with the help of her paintbrush. 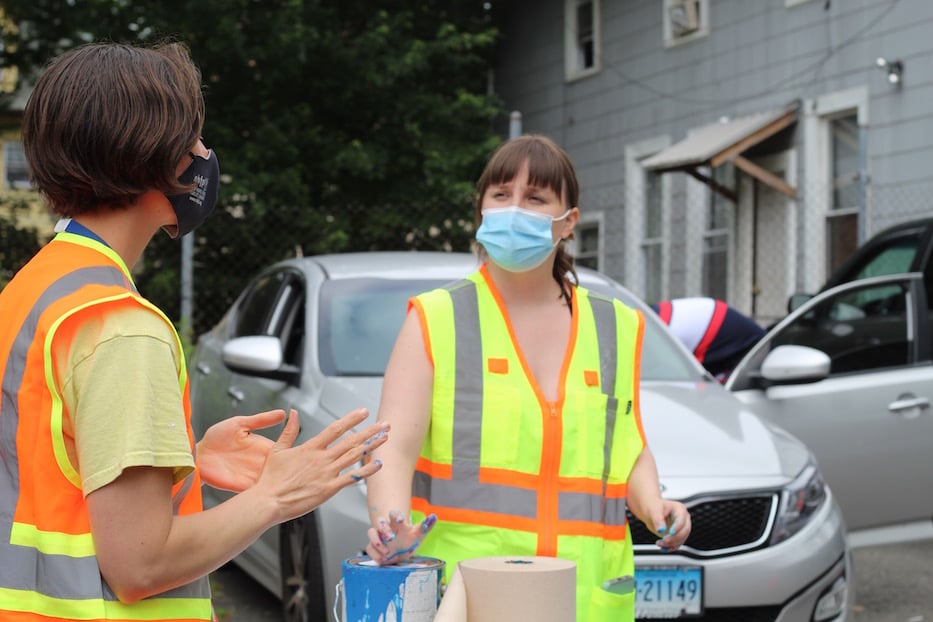 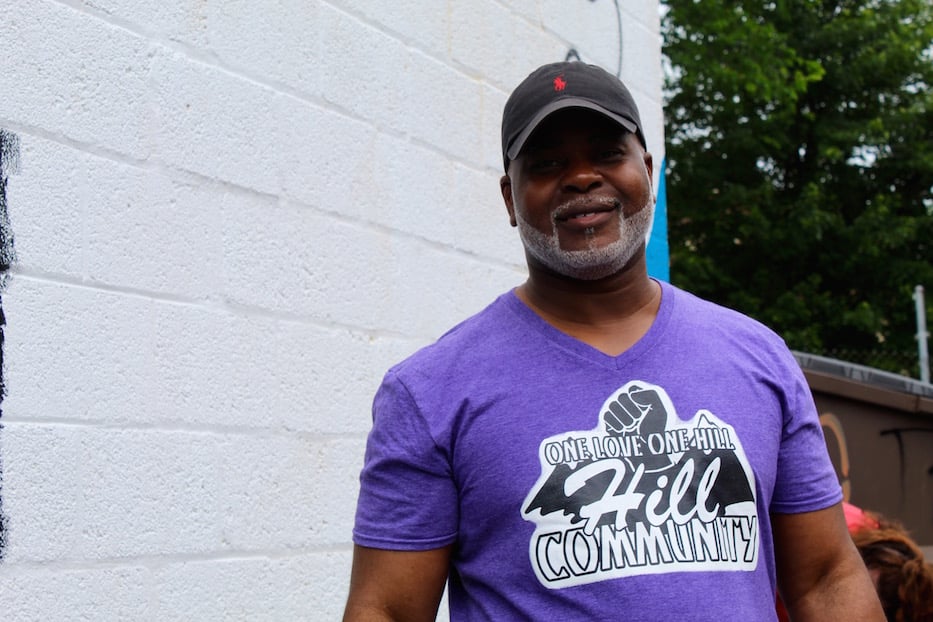 In the parking lot, Meikle set out fragrant containers of tostones, beans, and rice with meat and sofrito. At the wall, Hill Alders Kampton Singh and Ron Hurt both stopped by during the last few hours of painting. Hurt called the mural a welcome reprieve from the negative and violent stereotypes with which the neighborhood and the city are often saddled.

“You know, love is love,” he said. “Love is an action word. You can tell me that you love me, or you can show it. The Hill has been a forgotten part of the city, but I feel the love coming.”

He added that he sees the unveiling, which falls not only on Juneteenth but also during Pride Month, as “a sign” that the city is headed in a positive direction. He praised the focus on Coretta Scott King and on Sun Queen, the latter of whom is known for both her love for language and her activism in the city’s streets.

“I love that this celebrates Black women and their uniqueness,” he said. “We often talk about ‘it takes a village,’ but the village is the Black women. And we have two strong Black women here.” 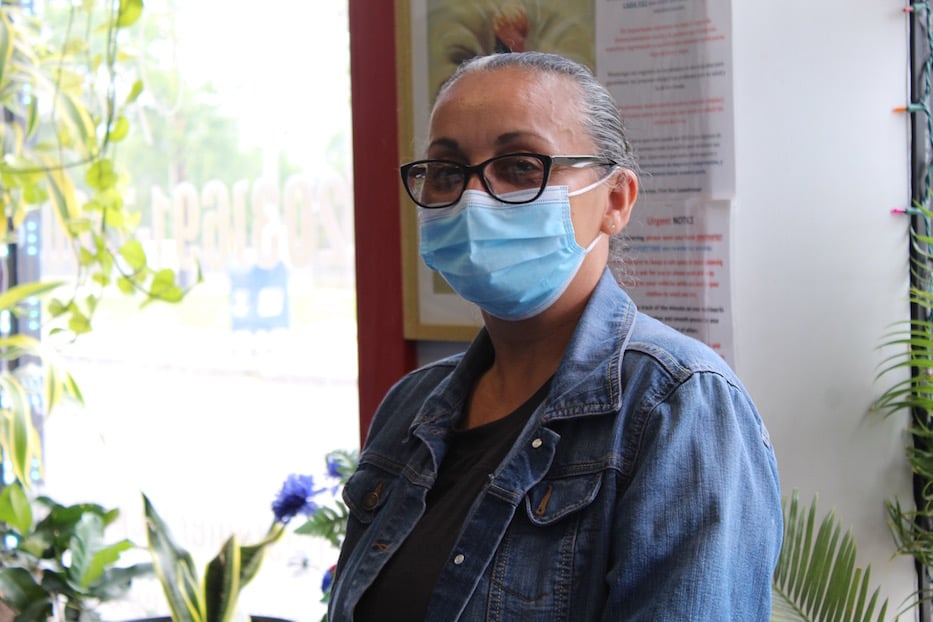 Inside the laundromat, employee Marilyn Aponte said she is excited to see the project come to fruition. Her brother, owner Josue Santana Sr., has volunteered the walls with the hope that the neighborhood’s beautification will be a boon to the business and to all who pass. But the mural also feels personal: Aponte lived in the Hill with her family as a child before a move took them to Fair Haven. She said that she prefers it to the graffiti that has appeared on the laundromat’s walls in past years.

Back outside, West Havener Barbara Gamble finished up as Damar Pringle and Emanuel Diaz rolled in for a few last minutes of paining. Gamble, who was born and raised in New Haven, heard about the mural while she was at the library. She said that she was eager to come out and paint with fellow community members, particularly after months of pandemic-induced isolation. 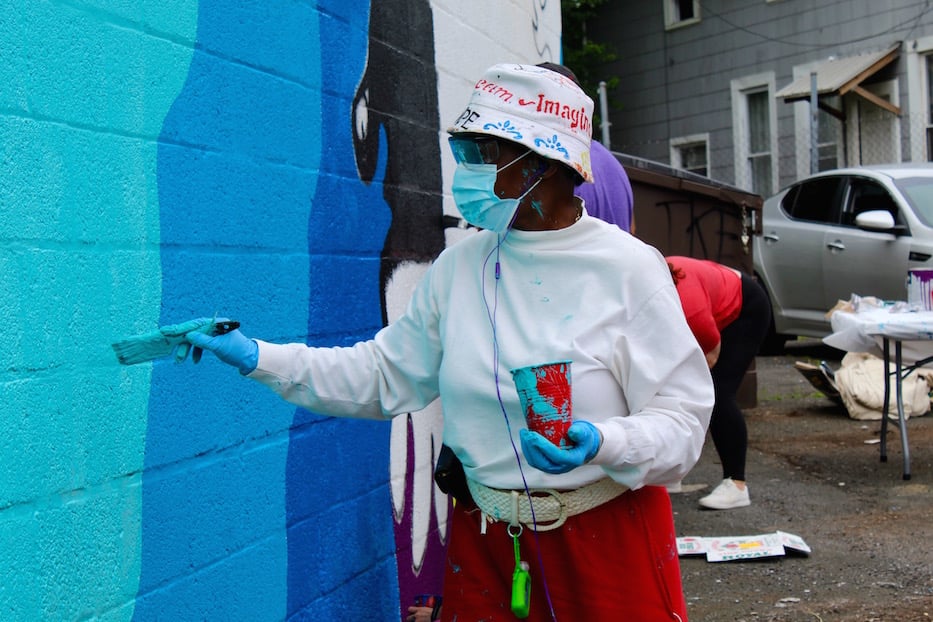 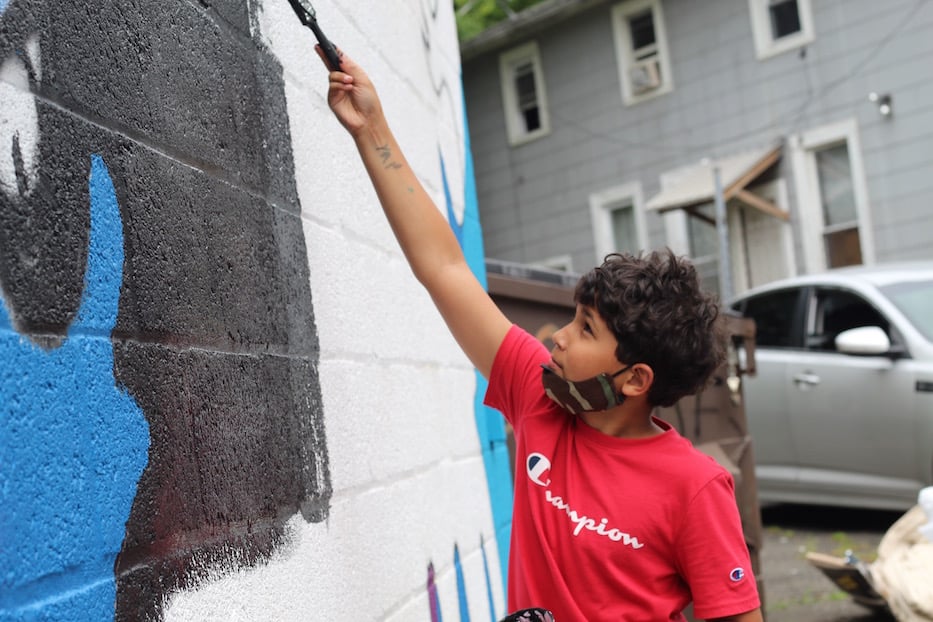 Top: West Havener Barbara Gamble, who grew up in New Haven. Bottom: Diaz. He said that the act of painting helps him express his feelings.

Pringle, who works with youth at the city's Tree Of Life Foundation, said that he jumped at the chance to bring young people out to the mural. Currently, he doesn’t see many opportunities for kids to make art in the Hill neighborhood. Many of the students he works with have artistic talent, but nowhere to express it. Diaz, who just finished fifth grade at Roberto Clemente School, is one of them.

“Drawing your feelings out—that expression is good,” he said. “Sometimes I’m shy. I don’t know how to express myself.”

As he lifted his paintbrush to the wall, he said he was glad to get out of the house “and just do something.” Because of the pandemic, he hasn’t had the materials to paint in several months. He has also been stuck at home in a neighborhood that is chronically under-resourced. He dipped his brush back into his cup, and beamed.