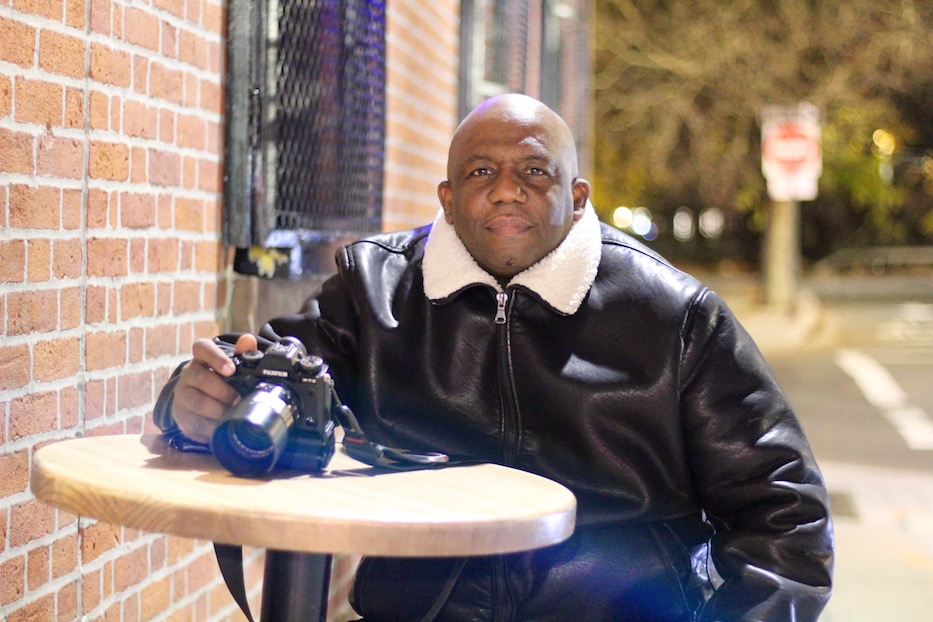 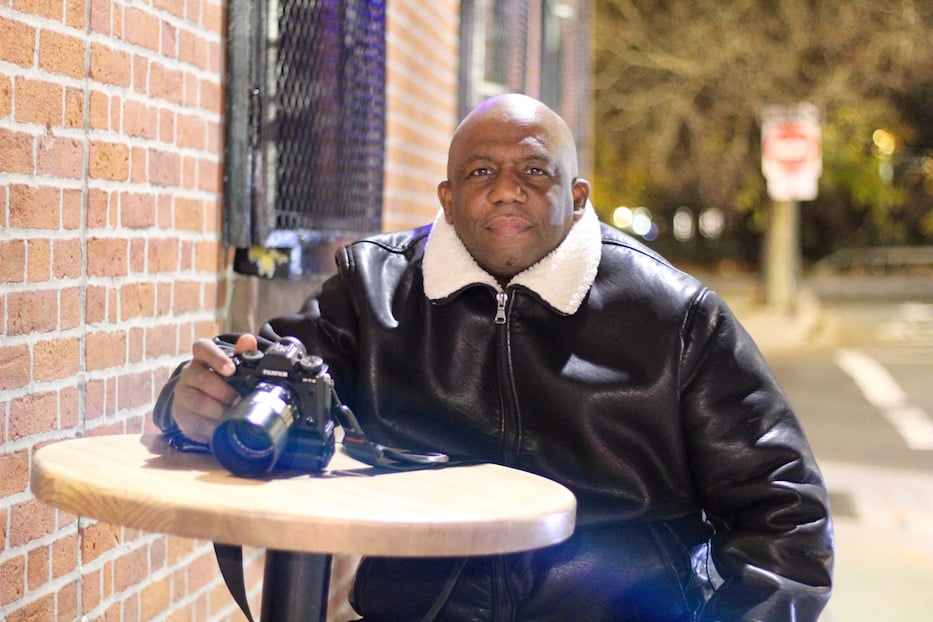 On one canvas, a man clasped his hands in supplication, his fingers soft and large as they covered his chin. Across the room, an iPad portrait of Biggie Smalls looked out at patrons with wide, wet eyes. Another showed a woman with a cigar hanging from her lips. The strains of Miriam Makeba’s “Pata Pata” coasted over Cafe Nine, wrapping themselves around the works.

The artist behind those portraits stood at the lip of the stage, busy photographing his own exhibition opening.  For those who know the photographer Leigh Busby, it came as no surprise.

The sharp eye behind Fly On Da Wall Photography, Busby is a New Haven multimedia artist known for his moving, incisive portraits of daily life across the city, from weekly salsa nights in the Ninth Square to protest marches, Sunday sermons and performances at the International Festival of Arts & Ideas. Friday, he opened a solo show of photographs, paintings, and iPad portraits at Cafe Nine downtown. It will be up until at least the end of December. 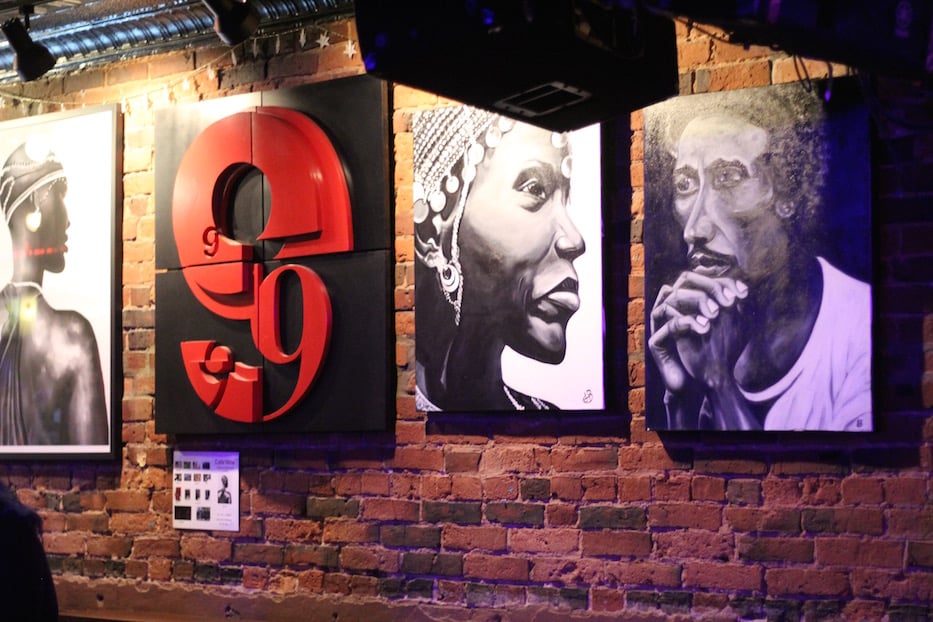 Leigh Busby's work includes acrylic painting and iPad portraiture as well as photography. He said he first got into acrylic painting after a few artists knocked his work, saying it wasn't real if it was on an iPad.

“This is my first solo show in so long, and it feels good,” he said, zipping his jacket all the way up to keep out a wintry November night. “This year … it’s really been a blessing.”

The show represents a year and a half in which the artist has, by what he calls the grace of God, flourished after a long struggle. He doesn’t take any of it for granted.

Born and raised in Trinidad and Tobago, Busby came to the U.S. in 1972. He lived in Hackensack, New Jersey for years, then moved to New Haven in 2013. It was around that time that he deepened his practice, first in iPad painting and acrylic portraiture and later in photography. After winning a design contest at Cornell Scott Hill Health Center, he enrolled in classes at Gateway Community College.

He started doing professional photography roughly three years ago, nurtured in part by I Love New Haven co-founder Chris Randall. No event was ever too small to hold his attention: he gave the same level of care to tiny performances, ruby-streaked sunsets and friends’ impromptu photo shoots as he did to rallies and marches that drew hundreds. An insomniac, he loved shooting the illuminated Q Bridge from Chapel Street at night. It was a subject he could count on, even at three in the morning. 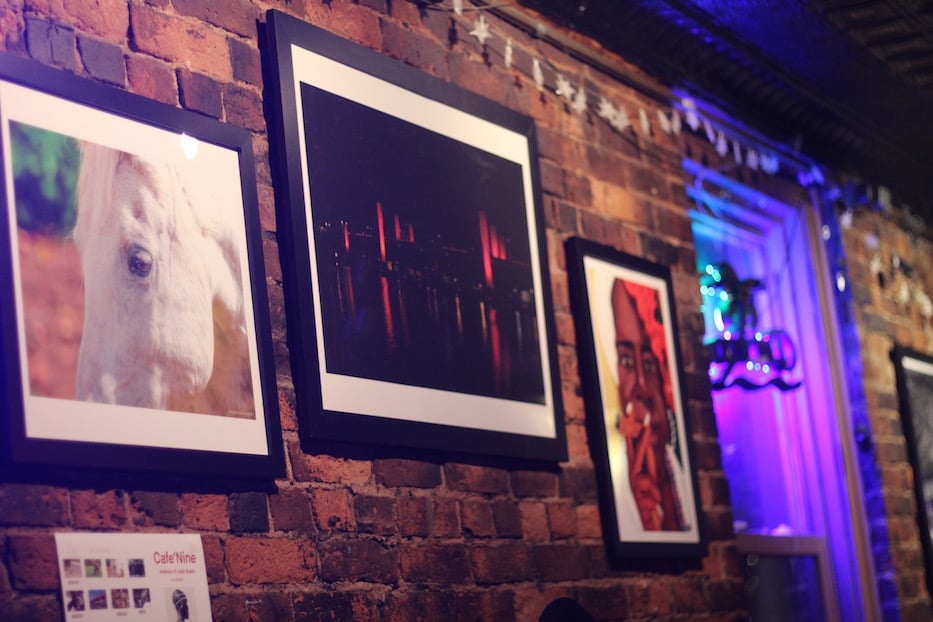 Busby's work includes photography at a nearby horse sanctuary, as well as the Q Bridge. The latter has long been one of his favorite subjects.

In the months before the Covid-19 pandemic hit the U.S., it wasn’t uncommon to see him around the city, testing out aperture and shutter speeds at tree lightings, memorial marches, and on walks around different neighborhoods. Then Busby got sick, with what started as a neurological event and lasted for months. After struggling to walk, the artist spent days in the hospital. Starting to cry, he recalled thinking that he was close to death. When he came home, he needed a cane, and often held onto the walls, booths, and tables as he moved.

His wife Darlitha, who goes by Dot, became a constant physical and emotional support. He remembered a day when she took him outside, “inch by inch,” to take a single photograph of the Q Bridge. Soon, he was walking with a cane on the closed roads of East Rock Park. A few weeks after that, he could walk again. He was grateful for the new lease on life, he said—and eager to get back to photography.

As the parallel pandemics of Covid-19 and entrenched racism emerged last summer, he was there to document both. His work is a living time capsule of that moment, from the removal of a monument to Christopher Columbus in Wooster Square to rallies against citywide gun violence to an impromptu meeting between City Wide Youth Coalition and Mayor Justin Elicker on his front lawn.

“I feel this is my home,” he said. “I don’t know the street names, but I know how to get around. I didn’t think I was going to be comfortable any place else but Hackensack, but here I am.” 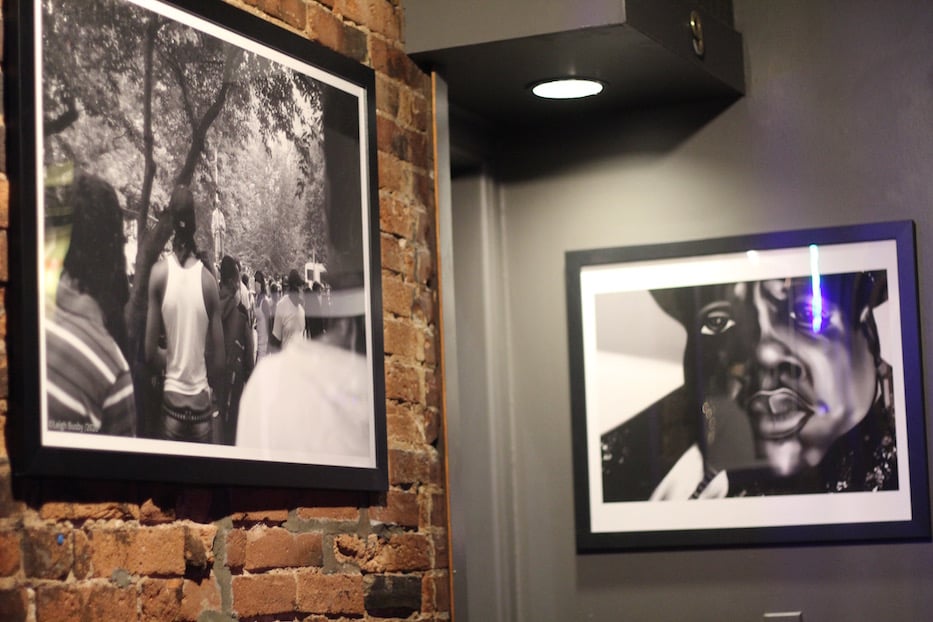 Leigh Busby's photograph from last year's removal of a monument to Christopher Columbus, and his iPad drawing of Biggie Smalls.

Last summer, the International Festival of Arts & Ideas hired him as an official photographer, and “oh my God, it’s been hallelujah since then,” he said. The National Endowment for the Humanities licensed his photo of New Haven’s William Lanson sculpture, which was unveiled last September. Yale University brought him on to shoot some of their drama performances. The City of New Haven worked with him on a campaign to spread vaccine literacy among both adults and teens.

It was around that time that he met Paul Mayer, who owns Cafe Nine and has held exhibitions at the spot before. Last summer, Busby said, the city still seemed quieter than usual. He came by the venue, which reopened in April of this year, and asked if he could photograph the shows for free. Mayer said yes, and soon Busby was sending him photos. The two clicked. Mayer couldn't remember the last time he had hosted an exhibition in the space.

“He had this energy,” Mayer said Friday. “Like this vibe that I connected to. And then I saw his work and it was fantastic.”

The show feels natural in the intimate music box of a venue, as if it has always belonged there. Up a set of stairs and beyond a heavy door on Crown Street, a mix of photographs, iPad paintings, and acrylic-on-canvas compositions line the exposed brick walls. Busby said that he was excited to showcase the selection because he is often known for his photography, but loves all of the mediums in which he works. 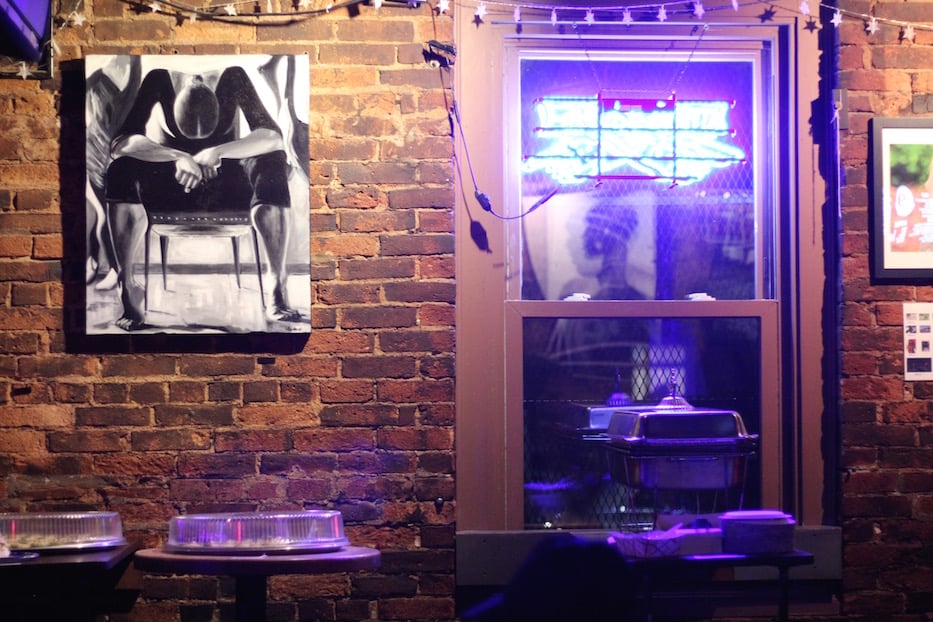 Close to the stage, three portraits bring a viewer right in. In one, a man looks out beyond the canvas, the skin sagging around his eyes. His pupils are piercing. He is pensive, hands lifted in prayer or perhaps request. There is a kind of gentle largesse to them, so that his fingers become the focal point of the painting. Beside him, Busby has rendered a close up of a woman’s face, a beaded headpiece glowing above her eyes. A woman’s sleek, slender shoulders glint from a frame beside the bar.

On the opposite wall, his painting Spent hits a viewer with a sense of total, full-body exhaustion, particularly after the last 19 months of a pandemic that is still ongoing. On the rectangular canvas, a figure leans forward over her knees, her legs spread wide. Viewers can feel the bone-deep fatigue in her body, from the neat part just behind her forehead to the shallow U her back and shoulders make as they sag.

She is in good company: a portrait of a horse in profile is installed just to the right, as if it is looking at the woman with one wide, expectant eye. The image comes from work that Busby has done with a farm rescue program that doubles as a sanctuary for the horses. 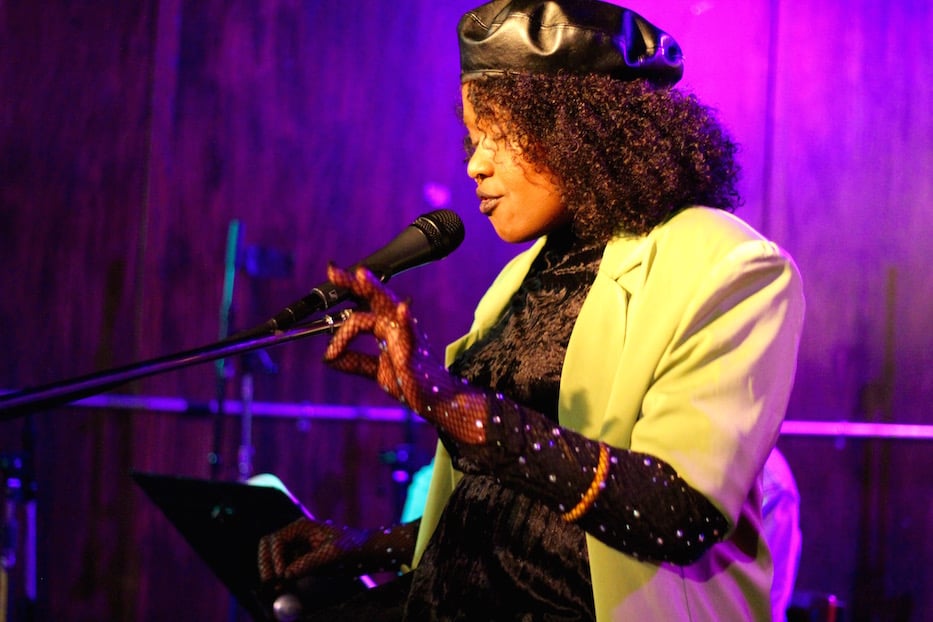 Thabisa: “It’s cold outside but it’s nice and warm in here.”

There are also some well-loved pieces, waiting for a second or third close look. In one photograph, Busby has frozen the moment in June 2020 at which a crane, operated by conservator Francis Miller, fastened supports around a statue of Christopher Columbus and began to lift him from his base. He is sailing through the air, pulled slowly to a resting place out of public view.

Viewers see Columbus through the trees, dangling over the backs and heads of hundreds of people who have gathered below. It’s different from photos of the same event in news coverage, many of which captured the moment from up close. This scene, rendered in greyscale, captures the statue’s fall from grace as a public spectacle.

At an opening Friday, the musician Thabisa swayed from side to side, relaxed as bandmates Pete Greco and Sam Oliver held it down on guitar and cajon behind her. She flowed from Miriam Makeba to a series of original songs, steady on the mic for almost two hours. As she sang, dozens trickled through the doors, drawn to the artwork and often looking for Busby himself.

“It’s a beautiful Friday!” Thabisa said as attendees nibbled on vegan burgers and polenta cakes from Firehouse 12. “It’s cold outside but it’s nice and warm in here.” 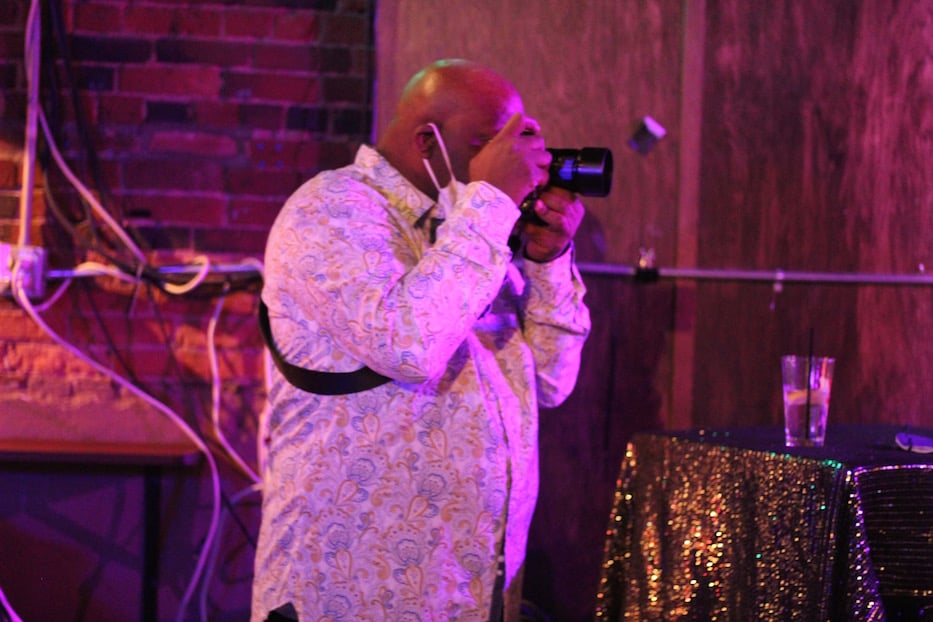 Busby stood at the stage, dancing at the hips and shoulders between shots on his Fuji X T3. Decades after turning to music as a source of comfort, he still seemed totally enthralled by it. Friday night, he recalled listening to Otis Redding’s “Sitting On The Dock of the Bay” as a child in Trinidad, while eating dumplings and letting the sun skirt over his face. From that moment, “I was alone all the time, and music kept me company,” he said.

Friday, he listened closely, stopping only to check in with Dot at a back table or greet friends, many of whom have become his subjects. He let his camera guide him around the room, pausing to chat with Randall and Teresa Joseph, artist Raheem Nelson, filmmaker Scott Amore and a team from Arts & Ideas that had rolled in. He greeted Josephine Ankrah, an artist who also dances salsa when there are lessons on Orange Street.

When he stepped out for an interview, admirers found him at a hi-top table outside, trying to stay warm as the temperature plummeted, and downtown revelers remembered that it was November in New England. On her way out the door, longtime fan and Westvillian Caprice Taylor Mendez told him she was especially drawn in by a portrait of a woman, her sleek and open back captured from behind. Busby was calling her an African Princess, he told her.

Leigh Busby's work will be on view at Cafe Nine, 250 State St., through the end of the year. For more information about the venue, visit its website.