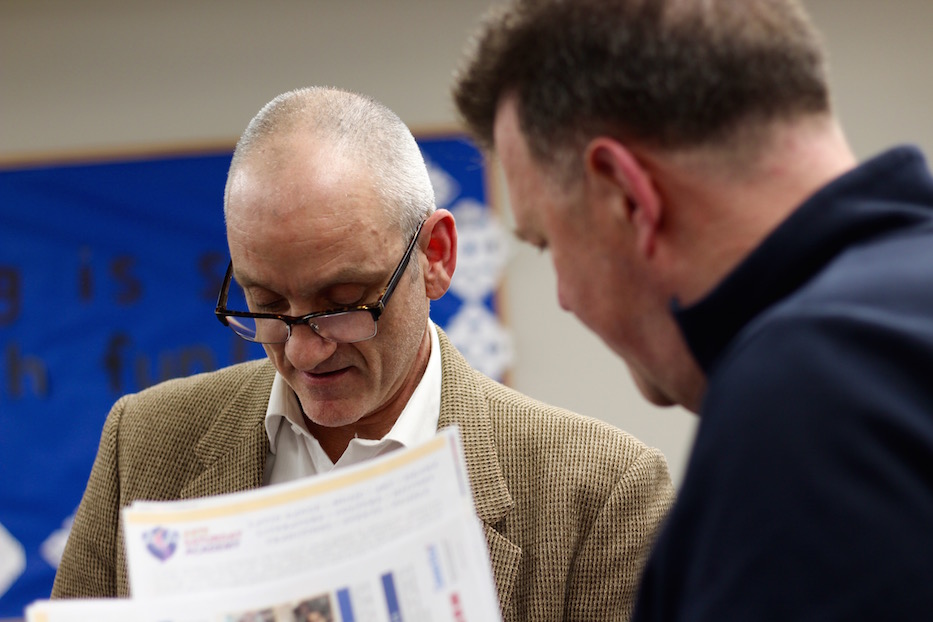 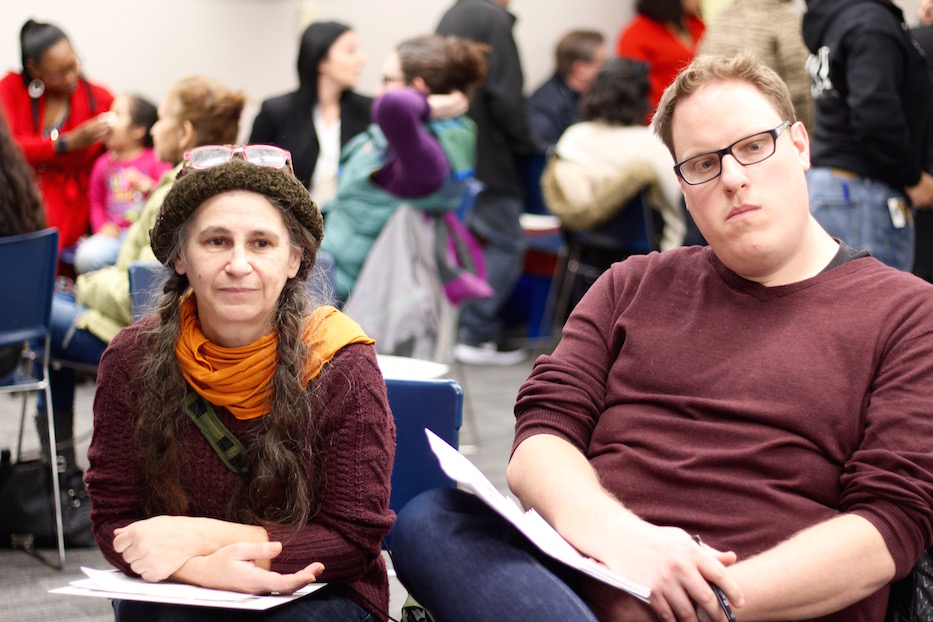 Joann Moran wants to paint a mural in Fair Haven. Danny Diaz knows where there are walls nearby in need of public art.

One way to bring the two strangers together? A neighborhood directory of artists and locations where they can practice their craft.

A neighborhood arts directory was just one of the suggestions floated Thursday night at the Fair Haven Community Management Team, as artists, arts advocates, and arts educators dug into the “Arts, Culture & Libraries” section of Mayor Justin Elicker’s transition report. Close to 40 New Haveners attended the meeting, held in the basement of the Fair Haven Branch Library on Grand Avenue.

The report was first released in January, during the first full week of Elicker’s administration. Among policy priority suggestions for housing, education, climate change, transportation, and public safety, members of Elicker’s team also included a wide-reaching vision for equity in the arts.

In mid-January, the city also appointed Adriane Jefferson as its new director of Arts, Culture, and Tourism, a position that had been vacant since the passing of former city arts czar Andy Wolf last year. (Jefferson officially began work Feb. 3) . 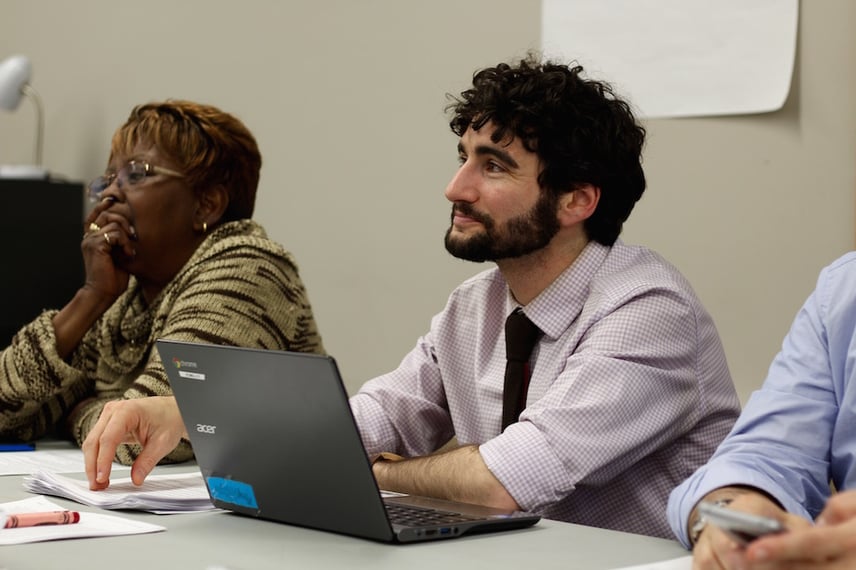 Thursday, Fair Haveners—some of whom had not yet read the report, but received copies at the meeting—talked over how that vision could most benefit the neighborhood and its residents. David Weinreb, who serves as the management team’s corresponding secretary and webmaster, called it a chance to “take our own ownership of this tonight.”

In a small circle dedicated to arts, culture, and libraries—areas that also received public input at two community meetings in the fall—attendees rattled off ideas.

Moran, who runs the eco-art nonprofit Lots of Fish, suggested the need for a directory of local artists, so that more funding remains in the community. Why have an outside artist do a project when there's talent locally, she asked.

“There are so many artists in the community, but people don’t even know who they are,” she said, noting that artists are often unpaid or underpaid for their work. “I’m an artist. I’ve made work everywhere else in Connecticut, across the country, and abroad. And it’s still hard for me to live in New Haven.” 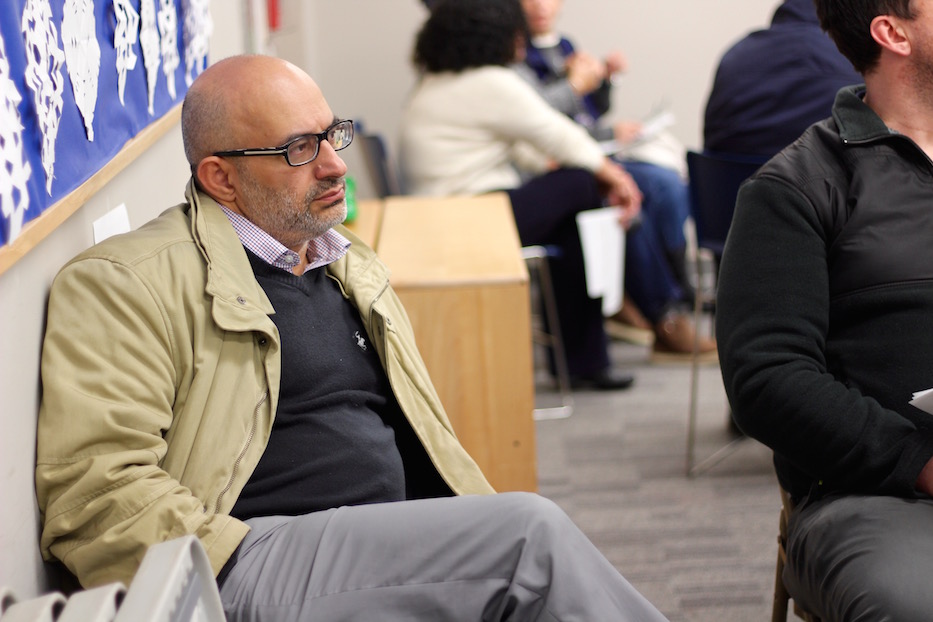 Diaz (pictured above), who co-runs Arte, Inc. with David Greco, suggested adding a list of existing spaces that may be looking for artists—like a restaurant or community center with wall space—and already offer arts activities in the community. For instance, he said, very few people know that Fair Haven School has a huge auditorium with new, state-of-the-art lighting.

Or that Junta for Progressive Action is sitting next to a building that looks like it could use a mural. He used Moran as an example, gesturing to her as he spoke from a few seats away.

“You’re an artist, right? But you don’t have a wall,” he said. “A lot of people don’t realize there is a lot of art already in Fair Haven. We need to recognize what’s here. Then, you can go to the city and show them the economic effect.”

Attendees also stressed the need for more free or low-cost activities for kids in the neighborhood. Greco, who has been running ARTE’s Saturday Academy with Diaz out of the Atwater Senior Center, pointed to the dearth of youth programming in Fair Haven.

He added that there’s a connection to the directory: find local artists, employ them to teach, and compensate them fairly.

“I’m a firm believer that artists should be paid,” he said, as several heads nodded in agreement. “Artists are always being asked to do things for free.” 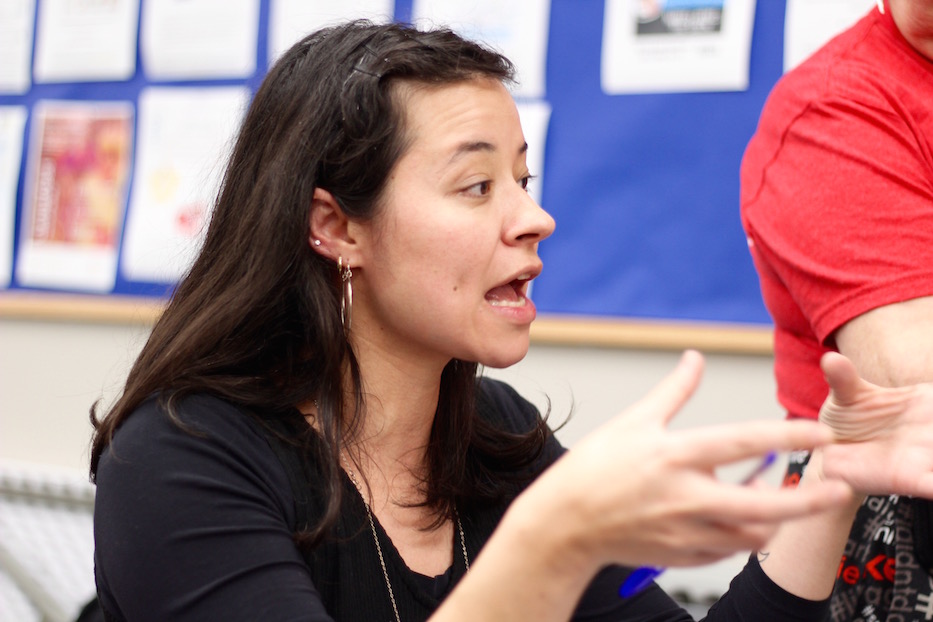 Nasty Women Connecticut’s Luciana McClure, who is helping coordinate a Grand Avenue Bridge Celebration planned for March, added that she wants to see culturally relevant programming added to the mix. Too often, she said, kids aren't taught about the cultures from which they come.

What about cultural heritage tours and lessons specific to Fair Haven's immigrant histories, she offered? Or a neighborhood marketing campaign, spearheaded by artists?

She also suggested holding monthly, arts-focused community meetings in Fair Haven to “fight the stigma” that the area is one dominated by crime, graffiti, and blight.

“Or how about doing a mural project with kids during the summer?” she added. “How do we remove that stigma and those stereotypes and remind people why Fair Haven is a place to come?” 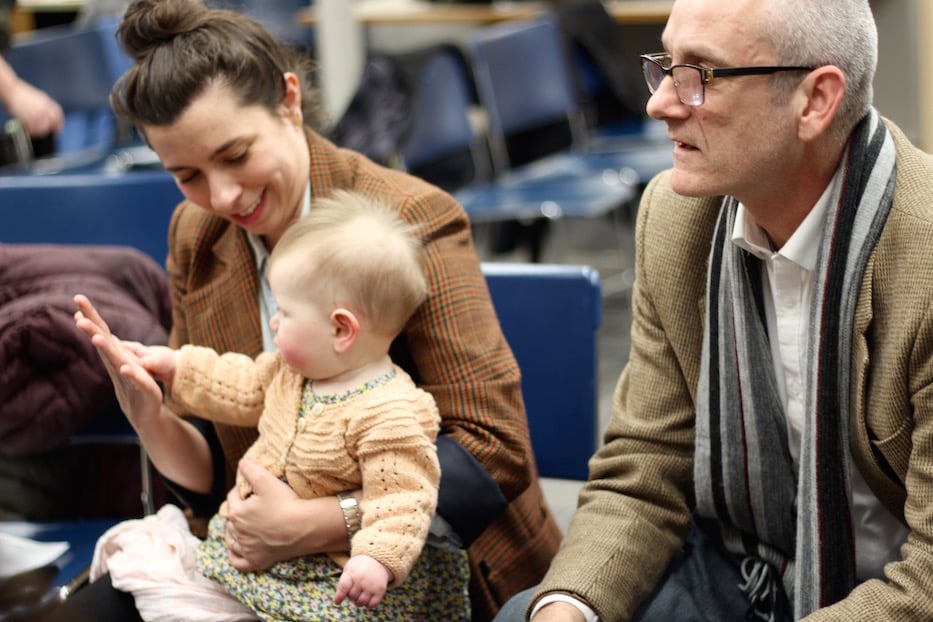 She and Diaz also suggested making sure Fair Haven has a voice in cultural planning for the city. While the city’s forthcoming adoption of the state’s READI (Relevance, Equity, Access, Diversity, Inclusion) framework may be a start, Diaz recommended that a neighborhood representative sit in on Cultural Affairs Commission meetings, which are held each month at City Hall.

Gerardo Sorkin, a clinical social worker who also teaches tango in the neighborhood, jumped in as the 40-minute "visioning" section of the meeting wound down.

“We have to create a plan to go hand-in-hand with concepts of sustainability,” he said. “How does Fair Haven differentiate itself from the rest of the city?”