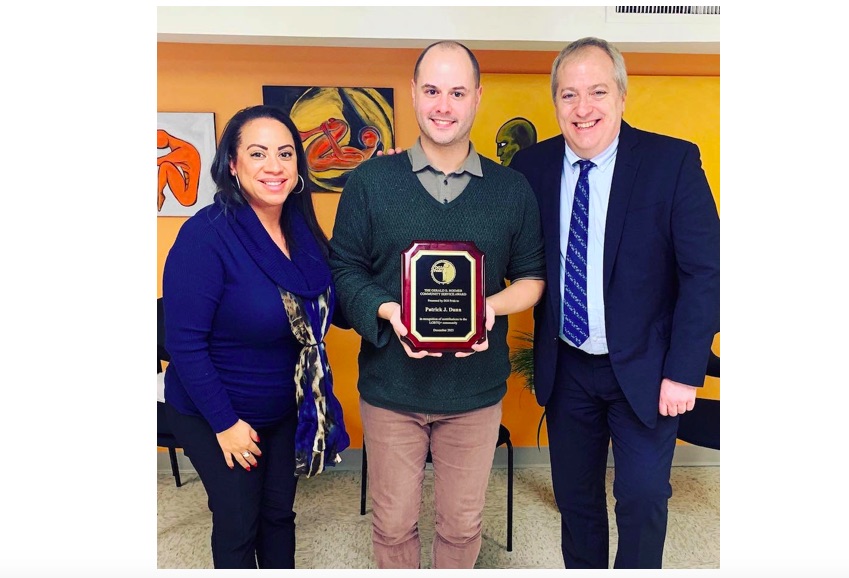 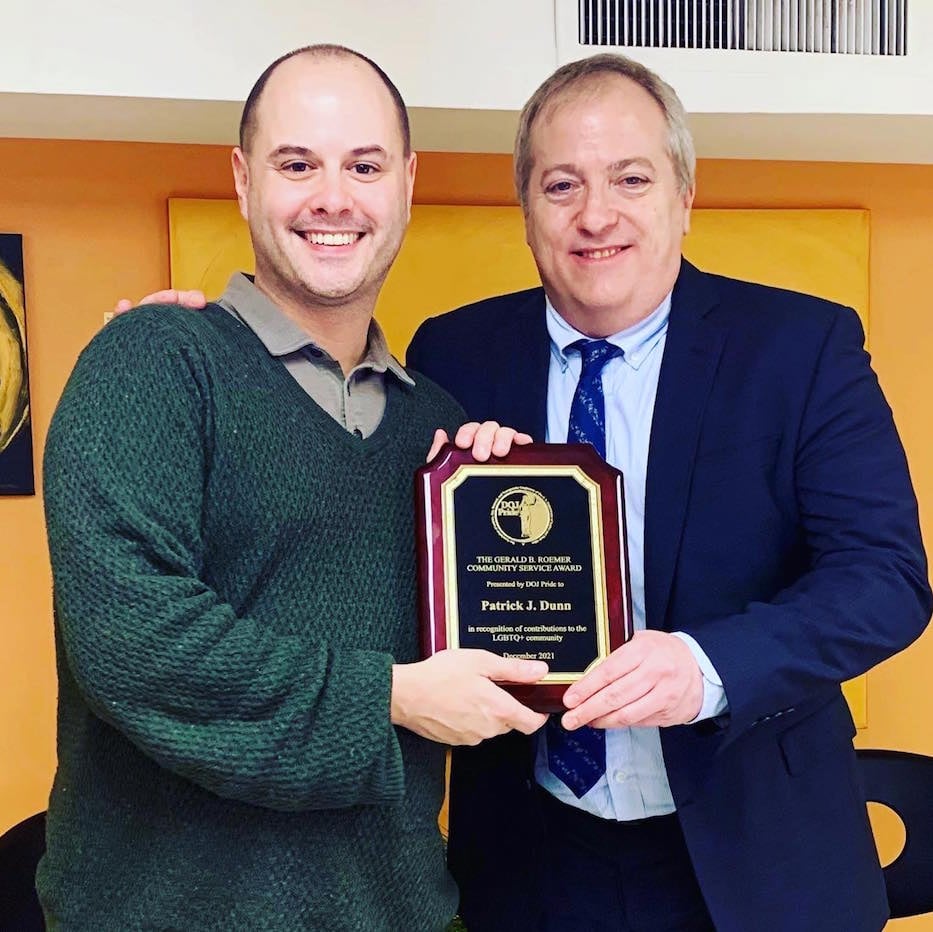 A champion of LGBTQ+ rights in New Haven has been recognized for his work by the U.S. Department of Justice. He’s celebrating by digging deeper into the community of care he has created.

That New Havener is Patrick Dunn, executive director of the New Haven Pride Center and a member of the state’s LGBTQ+ Health and Human Services Network. Last Thursday evening, DOJPride awarded him with the Gerald B. Roemer Award, a national honor in memory of Jerry Roemer, a lawyer for the ​​Department of Justice who died of AIDS at 32 years old.

David Heath, a DOJ Pride board member who works out of the ​​U.S. Attorney’s district office downtown, presented Dunn with the award at the Center’s Orange Street offices. Due to Covid, a short ceremony took place entirely online.

Dunn joins a legacy of trailblazing trans rights advocates, public health researchers, and a Super Bowl champion who is an ally in the fight for same-sex marriage. Thursday, he shared the evening with FBI Supervisory Special Agent Catherine Fagan, recipient of the James R. Douglass Award for contributions to LGBTQ+ life within the department.

“I feel weird,” Dunn said in a phone call Friday morning, still seemingly surprised at the news. “It's weird because I don't see myself as doing anything extraordinary. I'm just trying to make my corner of the world better. I think that there's so many people that do much greater things than I do, because so much of what I do involves me having to sit behind a desk." 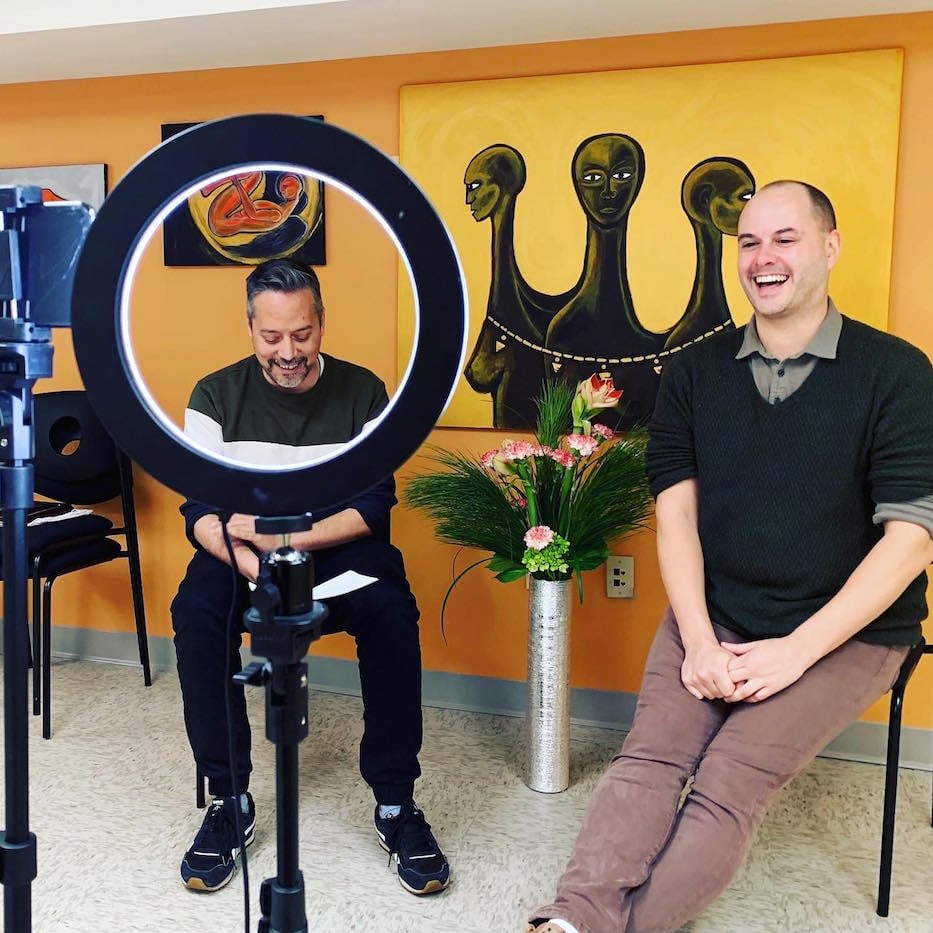 But Dunn, a University of Hartford grad whose leadership has transformed the Center, is rarely behind his desk. Raised between small-town California and Ankara, Turkey, Dunn came to LGBTQ+ rights through the arts—first theaters and museums, then the International Festival of Ideas and robust drag scene in New Haven. He became the first paid director of the New Haven Pride Center in August 2017 (click here for that coverage). He also serves on the Imperial Sovereign Court of All Connecticut, through which he has organized drag fundraisers and brunches.

In four and a half years, he has grown the Pride Center’s staff from one full-time employee to eight, with program officers in place specifically for LGBTQ+ youth, trans- and nonbinary people, and Latine city and state residents. Each month, it runs support and affinity groups and LGBTQ+ art exhibitions alongside annual events for Trans Awareness Week and Transgender Day of Rememberance, PRIDE New Haven, and World AIDS Day. It is the only nonprofit in New Haven to consistently offer American Sign Language interpretation in all of its programming.

When the pandemic hit, Dunn and Center staff paid suddenly-out-of-work artists, braved the remote pivot, and opened a new food distribution hub to combat rising food insecurity in the region. It was an uncertainty he understood intimately: Dunn’s drag alter ego is a fierce, far-left-leaning queen with high, powdery cheekbones named Kiki Lucia. As Kiki watched all of her work dry up overnight, Dunn was figuring out how to address the skyrocketing level of need he saw in New Haven.

Over a year in, the Center has continued to present online programming while running a food pantry, clothing closet, and limited-capacity in-person events. In November, Dunn welcomed artists, activists, and hundreds of LGBTQ+ community members to Orange Street for the 25th anniversary of the New Haven Pride Center. John Allen, founder of the Center, lauded him for the work that he’s put into growing the activist footprint on which it was built.

He has also used his advocacy on a municipal and statewide stage. This year, Dunn became the chair of New Haven’s Cultural Affairs Commission, where he has already started focusing on neighborhoods that have historically been boxed out of funding. With a co-creation team of a dozen people, he helped shape the city’s evolving Cultural Equity Plan, which is set to go public next year.  He also serves on the state’s LGBTQ+ Health and Human Services Network, part of the ​​Connecticut Commission on Women, Children and Seniors.

Hope Chávez, the director of artistic planning at Long Wharf Theatre, joined Dunn on the co-creation team earlier this year. She called the award “an amazing, amazing achievement” that has been years of service and countless extra volunteer hours in the making. After the co-creation team announced the city’s push for cultural equity in May, Chávez also became a member of the Cultural Affairs Commission and the Pride Center’s board. She pointed to Dunn’s role as a dedicated public servant and community member, joking that she still hasn’t figured out if or when he sleeps.

“He's not just a leader for his organization,” she said in a phone call Sunday morning, just shortly before the Center’s end-of-year board meeting. “He sees need, and as soon as he sees need, he feels the urge to meet it. Just the depth of what Patrick does for the community … I cannot imagine somebody more deserving.”

“He leans into opportunity and abundance, and he's so thoughtful, and he’s willing to be held accountable,” she added. “Often, the leaders who get celebrated are visionary and charismatic, and he is those things, but he is also someone who is always invested in the community.” 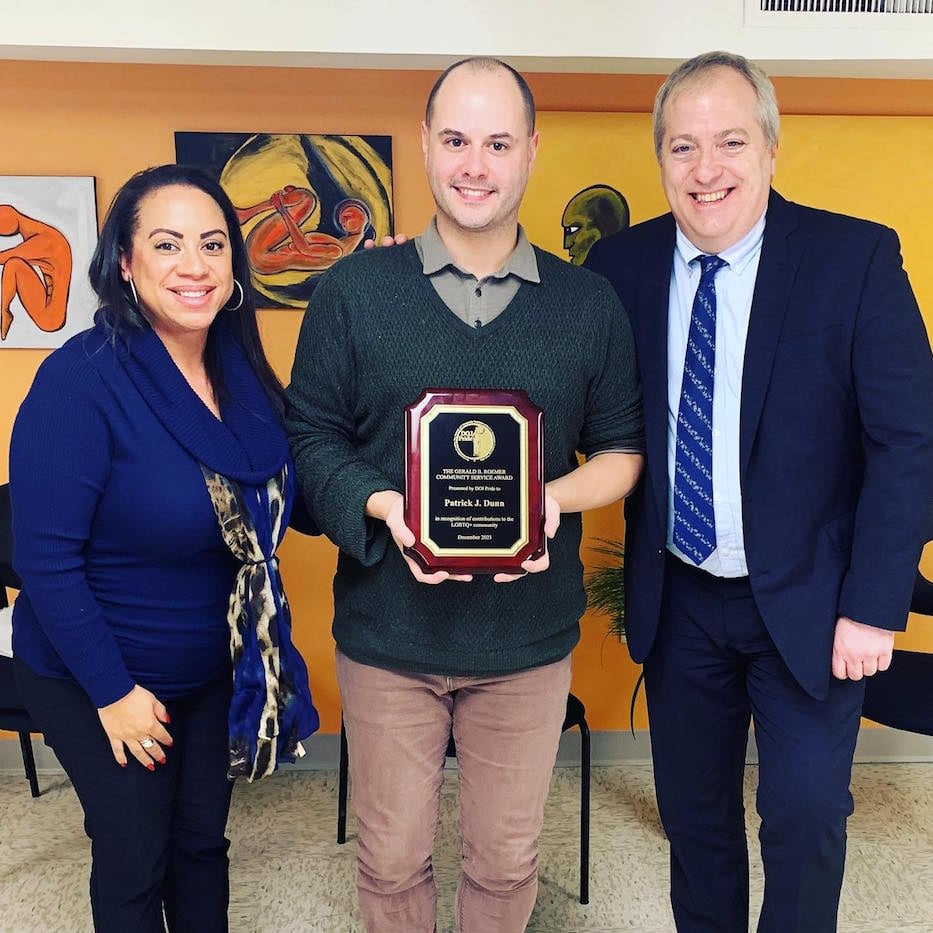 Artist Juancarlos Soto, now the director of case management and support services at the Pride Center, said that giving Dunn the award felt “like a 360 moment.” During his previous job as a community organizer for Planned Parenthood of Southern New England, Soto was the recipient of a Dorothy Award from the New Haven Pride Center. In 2019, Dunn handed him the award on the dance floor of a spotlit banquet hall in North Haven. Two and a half years later, Soto got to do the same with masks and a ring light in the Center’s basement.

“I think any organization is honestly as good as its leader,” he said in a phone call Friday. “What we value greatly is that he trusts us. and that's incredibly important for folks who are doing the work. He trusts us and believes with us and works with us to make this happen. That’s where the magic happens. That's really valuable to me.”

The award itself honors Roemer’s life, and specifically his decision to head to law school and then work with the Department of Justice after discovering that he was H.I.V. positive in the 1980s. When Roemer found out that he had H.I.V., he was a sweet, small-town Nebraska boy on his way to becoming a trailblazing lawyer for the Department of Justice. In the 1990s, he was one of the early users of ​then-nascent protease inhibitors, which worked until they didn’t. He died of a resurgence of the virus in 1997.

His memory feels significant in this month, which begins with World AIDS Day and ends with the promise of some new beginning, however small. On Dec. 1, the Pride Center held a four-hour virtual conference titled “Ending The Epidemic: A Shared Responsibility.” Attendees came from across the globe.

Heath, who has served on the board of DOJ Pride since 2019 and nominated Dunn for the first time this year, said that Dunn was a candidate in “a competitive field” of nominees from across the country. The two met a few years ago, during outreach events that the department was involved in. Since, Heath has kept tabs on the Center’s growth from his own home in downtown New Haven.

“He's done amazing work to build the Pride Center up,” Heath said. “He's been such a phenomenal leader. I just think Patrick has done so much for the Center and for the community.”

Back in his office Friday, Dunn was still feeling sheepish. As he sees it, he said, his win is also a win for the Center. It’s the only way he can process the recognition. He added that one thing was unequivocally good: the virtual ceremony allowed his whole family to come. His mom, dad, and sister were all able to log in from their respective homes.

“You would think for me as a drag performer, I would like the attention,” he said. “But when I'm Patrick, I get very uncomfortable when people want to recognize what I'm doing. I'm just focused on trying to make the world a better place. This is what I do for the love of community. I love what I do every day.”