Over 1,600 Hit The Streets For Refugees 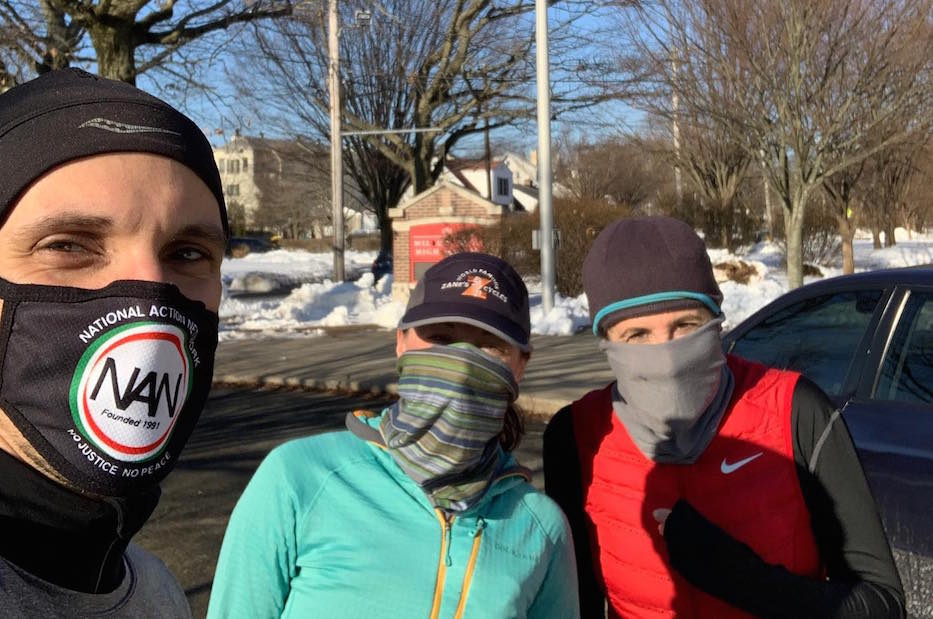 One ran for the refugees she met in church. One ran for a young man New Haven lost much too soon. One ran for herself, because she’s lived that history firsthand.

Across the city—and, for the first time, the globe—over 1,500 runners hit the streets for Integrated Refugee and Immigrant Services’ (IRIS) annual Run for Refugees. For the first time in its 15-year history, the run has gone virtual and is spread out over two weeks, from Jan. 30 through Feb. 14. On Sunday, IRIS Executive Director Chris George and emcee Gladys Mwilelo welcomed the Yale Gospel Choir, Afghani rock band Kabul Dreams, musician Thabisa and several guests to celebrate the run online. It is normally held in East Rock on Superbowl Sunday.

"You have no idea how running and walking around everyone, always seeing people from all walks of life, supporting and running to support refugees—it always brings a joy to me," said Mwilelo, who came to New Haven from the Democratic Republic of Congo in 2013. "Because it's always important to have someone supporting something that empowers them ... something that's so important to you and to the people around you."

Thus far, the run has raised $75,972 of its overall $100,000 goal. A total of 1,654 runners have registered for the event, which is open for one more week. A second run specifically for college students, many of whom are quarantining in their dorms, is planned for May.

For the first time in four years, the run is taking place under a new presidential administration, rather than the specter of multiple Muslim bans and historically low refugee admission caps. Last year, the Trump Administration set a cap of 18,000 refugees, of which fewer than 12,000 made it into the country. Last week, President Joe Biden announced that he would be raising the cap to 125,000 refugees per year. During his first week in office, Biden also suspended Trump’s Migrant Protection Protocols policy, known more informally as the “Remain In Mexico” policy.

Ann O’Brien, director of community engagement at IRIS, said that the organization does not expect a significant influx of refugees until this summer at the earliest. In the past four years, vital resources for refugee resettlement—asylum interviewers, for instance—have been reallocated to Trump’s wall at the U.S.-Mexico border. Meanwhile, IRIS has expanded its operations to serve undocumented residents and immigrants in the city more broadly. It is still resettling refugees, including Special Immigrant Visa (SIV) holders from Iraq and Afghanistan, and a family of six from the Congo that arrived in Hartford last week.

The run comes at a critical time for the organization. Since last March, IRIS has seen use of its Nicoll Street community food pantry grow threefold. The bulk of its work, from case management and language training to job assistance, has moved online due to the Covid-19 pandemic. As unemployment and hunger rise in the city, O’Brien said that IRIS has found itself providing “massive additional supports to families,” almost all of which feels more difficult to do virtually than in-person.

Across the city, runners laced up and pounded the pavement to support that work. From her home in East Rock, runner Elizabeth Bickley mapped out a course in 18-degree weather for a handful of friends. For the past four years, she has worked with IRIS through St. John’s Episcopal Church, where resettled refugees normally come for weekly English for Speakers of Other Languages (ESOL) classes. That work has been largely on hold since last March due to the Covid-19 pandemic.

At the church, she got to know several Syrian and Afghani refugees who fled their homes before coming to New Haven. Through her job with Town Green Special Services District, she has also become close with several immigrants, including the owner of a food truck on Long Wharf who is married to one of Town Green’s downtown ambassadors. Last year, Bickley “took my sabbath” in the streets instead of in church, and participated in the run for the first time.

“Especially as residents of a sanctuary city, it's important that we do our part to make this city hospitable as a great and safe place to resettle,” she said in a phone call Sunday evening. She added that it has become especially important to her in the last four years, as anti-immigrant rhetoric has spiked across the country. 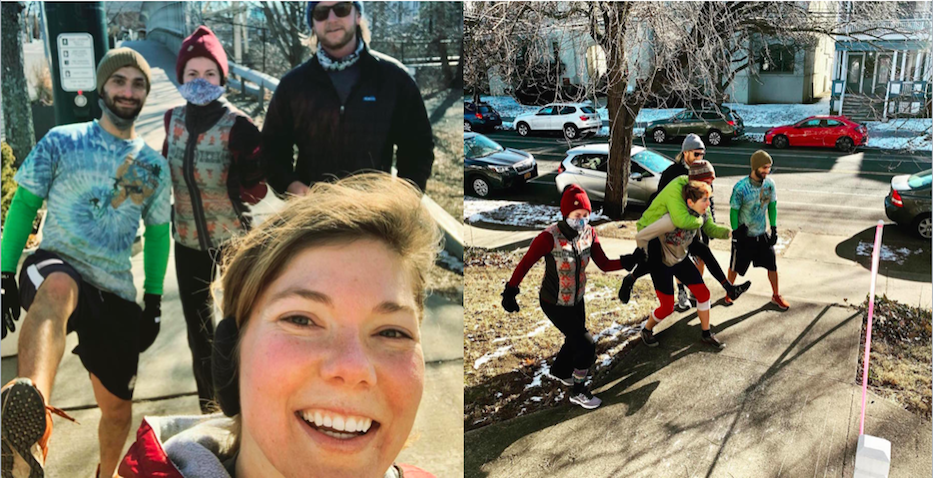 Bickley and her team set up a starting line with decorative ribbon that they ran across to begin the race. Elizabeth Bickley Photos.

Bickley settled on a route that took her and a group of friends from East Rock out to Long Wharf, through downtown, and by the local restaurant Olmo for bagels and hot chocolate on the way home. She said that running to the water was symbolic: the harbor has long signalled a welcome to the city. The path, including the Canal Dock Boathouse, sits on a wharf engineered and built by William Lanson, a formerly enslaved Black man. Nearby, the parking lot of Sports Haven was once a drop-off point for refugee families arriving in New Haven. The total distance was ultimately closer to five miles than five kilometers.

“It's a great way to hang out during Covid-19,” Bickley said. “I’ve been finding ways to get outside. When you have something like supporting IRIS, that's an external motivation that makes you want to be getting out and doing this.”

That sentiment echoed through Sunday’s event, as students from the Yale Gospel Choir sang an arrangement of Emma Lazarus’ “The New Colossus'' online and big, white flakes of snow fell outside. Lazarus’ poem is engraved in a bronze plaque on the Statue Of Liberty's pedestal.

MakeHaven Shop Manager Lior Trestman, who ran with Bickley, joined because of his longtime support of the organization. In 2015, he began volunteering with IRIS to coordinate the run and shuttle refugees to and from medical appointments. For a while, he was part of the organization’s cultural companions program. This year marked the first that he was able to participate himself, with no post-run party to prepare for.

“I’ve been curmudgeonly about all the Covid-19 events,” he said. “But Lize [Bickley] is super upbeat, and she really encouraged me. The point of a run is to hang out with people and to feel the excitement and to be outside. For me, it was the opportunity to run with friends around town.”

Trestman—who has run multiple marathons but “don’t consider myself a runner”—said he was excited to show his support despite the below-freezing temperatures. He praised the number of organizations around New Haven that work with and in service to refugees, including IRIS, Sanctuary Kitchen, and Havenly Treats.

He added that his own life is richer because of the immigrants and refugees that have populated it. Several years ago, he lived with Maher Mahmood, an Iraqi refugee who came to the United States with his family in 2014 (Mahmood’s mother is the Hamden-based designer Bushra Madhi, who has also run in years past). After learning that Mwilelo wanted to be an airline pilot through his work at Cold Spring School, he took her flying and pored over his flight textbooks with her.

Other runners tried to stick to the run’s 2020 course, which began at Wilbur Cross High School and wound through East Rock Park and the surrounding neighborhood. Saturday, High School in the Community (HSC) educator Christian Shaboo and fellow staff members met in East Rock to run the five kilometers together. Shaboo has been a fan of IRIS for years, after learning about the organization through Collective Consciousness Theatre.

Saturday, he spent the run thinking of Brandon Jenkins, a 18-year-old HSC grad who went missing and was later found dead earlier this year. Last year, Jenkins was one of a handful of students and faculty who ran on an HSC team that senior Marlen Pineda, herself an immigrant, organized. This year, Shaboo said the 5K felt like a tribute to Jenkins, and all who are grieving his loss. When he reached the final mile, he thought of watching Jenkins’ own sprint to the finish line last year.

“It always seemed to me that he was running somewhere,” Shaboo said. “He was really into being active, and being physically fit. Or he was running into my classroom, where he’d asked these kind of big, bold questions. He’d want to come in and talk through this kind of stuff, or then he'd  realize his mom was waiting, and sprint to the parking lot. Or he'd sprint to game club. That's what I think about when I think about Brandon.”

Clockwise from top: IRIS Executive Director Chris George, Gladys Mwilelo, and the actor Sam Waterston, who made a guest appearance, at Sunday's event.

On Sunday, Mwilelo also spoke virtually about why she’s been running for the past seven years. Now a senior at Central Connecticut State University, she fled the Democratic Republic of Congo with her parents when she was just two years old. She recalled living with her family in a refugee camp in Burundi for 13 years, often waiting for water or selling food instead of going to school.

"We felt we might live another life," she said. "Coming to the U.S. was such a dream, and it didn't seem real. But we had no idea how hard it would be when we got here as well."

When her family arrived in Connecticut, IRIS helped them move into their new home and helped furnish their apartment, including a bed that she called “a dream come true.” The organization helped her dad find a job. She and her sisters enrolled in school, began learning English, and discovered extracurricular youth leadership and theater programs. She has run through the loss of a sibling, difficulty in school, and grueling academics. Last November, she and her family members voted for the first time as U.S. citizens.

“We know with every fiber of our being how no person is immune from being a refugee at some point,” she said. “My past motivates me to strive for the future.”

The run goes through Feb. 14. Participants who wish to register and run can do so here. To find out more about IRIS, visit the organization's website. To watch Sunday's event, click here.